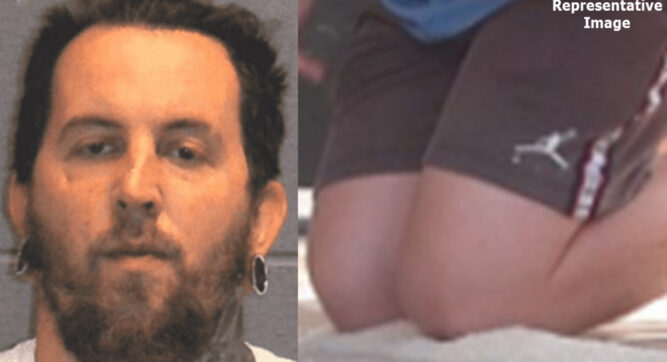 In Naugatuck, Connecticut, a little boy living under the nightmare of his sadistic stepfather’s reign had to endure unbelievable levels of abuse and torture. Police arrested 31-year-old Kevin Grant after learning the man had put the child through an unbelievable gauntlet of inhumane treatment. It’s alleged the stepfather did things like force the boy to drink glasses of hot sauce, not allow him to sleep in a bed, make him throw up, and kneel on uncooked rice for an entire day. Even worse, the boy’s mom, Kaitlin Elizabeth Baptiste, 29, did not lift a finger to protect her son from Grant’s horrific abuse.

The child was finally rescued on October 1 after an anonymous complaint was made with the Department of Children and Families concerning the boy’s ongoing abuse. Police investigations led to discovering at least a dozen ways the stepfather would inflict pain and torment on the child, reports Hartford Courant. In June, one incident was when the child was watching TV when his brother had fallen into a table while playing with his other siblings. The child reportedly “cracked his head open,” and while the abused boy had nothing to do with the accident, the stepfather blamed him.

As punishment, he made the child face a wall for the entire week. He even had to eat all of his meals standing.

The Stepfather is also said to have made the child sleep in the garage for a few nights and then in the laundry room for 120 days. When talking to an investigator, the child said that his mom would permit him to knock on their door only when he needed to use the bathroom. However, the stepfather would even scold him for doing that. Grant would yell at him and tell the boy to urinate in his pants rather than knock.

Unfortunately, there there was more to the nightmarish torture Grant put the boy through.

“Kevin would constantly do things to him and make him do things that would hurt him,” the arrest warrant said.

He had the child do push-ups until his arms gave out, and he would make the child stand on a leader with a leg suspended in the air while Grant would place thumbtacks under him. According to the warrant, the sadistic man even once burst a bottle rocket placed inside the boy’s mouth, injuring injuries.

Two people were arrested in connection with a case of child abuse where the victim was forced to kneel on tacks and drink hot sauce until he vomited. https://t.co/ld8a00TJpo

After authorities learned about the disgusting abuse, Grant was arrested and charged with intentional cruelty to persons, second-degree assault, risk of injury to a child, disorderly conduct, and second-degree reckless endangerment, reports the AP.

The mom was also arrested for her passive role in her child’s sadistic torture. Police charged the woman with second-degree reckless endangerment, risk of injury to a child, and conspiracy to commit both disorderly conduct and intentional cruelty to persons.

“Through the investigation, it was determined the accused was aware that her husband, the juvenile’s step-father, was forcing him to sleep in a locked closet for several months and would subject the child to various physical punishments, including kneeling on tacks and drinking hot sauce until he vomited,” the police said, as quoted by the Daily Mail.

Horrific 💔 Other alleged abuse the boy faced included drinking hot sauce until he threw up, doing pushups until he could not use his arms, and standing on a ladder step with tacks underneath. https://t.co/JW8iyseKjB

The stepfather was released from jail after posting a $25,000 bail while the boy’s mom made her bail of $10,000. Both are scheduled to make a court appearance on November 10. For more on this story, you can also watch a news report below.