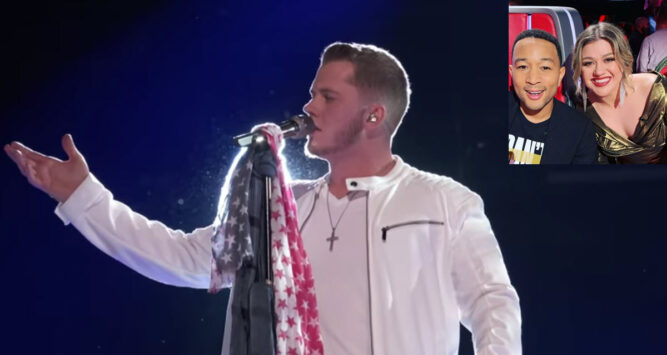 Kelly Clarkson and John Legend are two very accomplished artists who, between them, have 14 Grammy wins and about 48 nominations. So it’s safe to say that they know a thing or two about singing. But, when the two were serving as judges on The Voice in 2019, they were suddenly attacked by fans who called them “Unpatriotic” and “America haters,” simply because they had the audacity to criticize a singer’s performance of “God Bless America.” The song, which Lee Greenwood wrote, was performed by contestant Gyth Rigdon during the top 8 semi-finals round. However, both judges felt that Gyth made a poor song choice in choosing “God Bless the USA.”

Clarkson noted how the song was not his best vocal and explained that the song was best sung by a large group rather than just one person. She also mentioned how she believed it was a meaningful song but did not feel it was appropriate to sing on the Voice. And John Legend agreed, saying that it wasn’t Gyth’s best performance, but he felt he delivered a lot of energy and emotion to the song. However, Gyth tried to make it sound as though they were criticizing the song, saying:

A lot of folks lashed out at the two judges calling them unpatriotic for criticizing the performance.

I don't know about Kelly, but John Legend is one of the most patriotic stars in Hollywood!
Kelly Clarkson and John Legend called 'unpatriotic' and 'haters' for criticizing ‘Voice’ contestant’s ‘God Bless the USA’ performance : https://t.co/AnLEPzZpcc via @AOL

However, many feel that the negative backlash has less to do with offensive remarks and more to do with the politically divided times.

Depending on who you ask, some will say that Clarkson and Legend let their politics taint their judgment. In contrast, others would argue that angry fans let their political views color their interpretation of both judges’ critiques.

Look at one of the sources of all this, John Legend (who's a legend mostly in his own mind). He is as anti-American as they come.

It’s safe to say that people will be debating this moment for years to come. You can watch a video talking about the controversy below.

Lee Greenwood "“I’m always honored when anyone would choose to sing my song, ‘God Bless The USA’ I think it’s incredibly unfortunate that there’s any backlash at all toward Kelly Clarkson and John Legend over their critiques of Gyth Rigdon’s performance." https://t.co/HQeJ4dIXHB

You can also watch Gyth Rigdon’s full performance in the video below and judge for yourself.