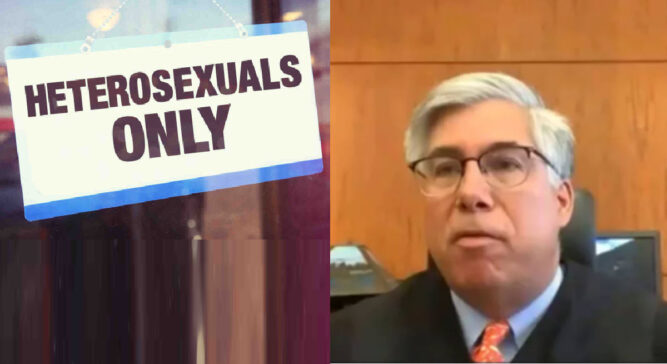 Michigan First District Court of Appeals Judge Christopher Murray recently ruled that businesses are allowed to discriminate against same-sex couples based on their religious beliefs. However, the same judge ruled that discriminating against gender identity is illegal. The judge’s decision comes after two companies were sued in court after refusing to serve a transgender person and same-sex couple based “on religious grounds.” Murray decided to uphold the legal precedent set in Michigan following the Barbour v. Department of Social Services ruling in 1993 as well as the Eliot-Larsen Civil Rights Act. He reasoned that banning someone base on their biological sex also included gender identity.

According to his ruling, the judge believes the same laws that protect the trans community do not apply to those facing discrimination because of their sexual orientation. He notes that ELCRA protects people based on factors such as ‘religion, race, color, national origin, age, sex or marital status’ exclusively.

And while Nessel did commend the judge’s ruling regarding discrimination against trans people, she vowed to appeal Murray’s ruling, which now allows companies in Michigan to discriminate based on sexual orientation.

She also quoted Stacie Clayton, the chairwoman of the Michigan Civil Rights Commission, who said:

Also, Murray admitted that his ruling is not final as “it does not resolve all of the pending issues in the case.”

This statement acknowledges the missing component in the legislation that does not protect individuals base on their sexual orientation.

His decision came after two companies were taken to court for barring a same-sex couple and a transgender person ‘on religious grounds’.#Michigan #DanaNessel #ChristopherMurray #LGBTQ https://t.co/ZgZlrlRo5q