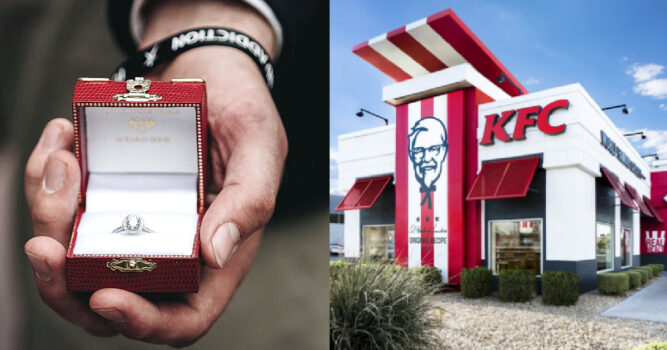 One of the most profound and life-changing speeches I ever heard was the one given by Charlie Chaplin in “The Great Dictator,” during a scene in which he denounced the idea of feeling superior to someone else. In his speech, a few lines stuck with me “Our knowledge has made us cynical. Our cleverness, hard and unkind. We think too much and feel too little.”

As we all know, people can be very judgemental, especially when they have the anonymity afforded to them thanks to the internet. While everyone has a right to their opinions, there are times when it’s probably best to keep their thoughts to themselves, especially if they are tearing someone else down to elevate themselves.

The Excitement and Anticipation of Getting Married

From the moment someone drops to one knee and proposes to went, they are standing at the altar, ready to say “I Do,” the anticipation and excitement during the engagement process are like nothing else, save for getting pregnant. A Couple is looking forward to the future, and so many hopes and dreams are in their heart. It’s a beautiful time when we generally expect the best out of life hand and hand with the person we love. But, before all that happens, there are a few things a person must first decide, such as where to propose and if it should be done in private or public?

In 2019, this South African Man Decided KFC Was the Right Place to Pop the Big Question 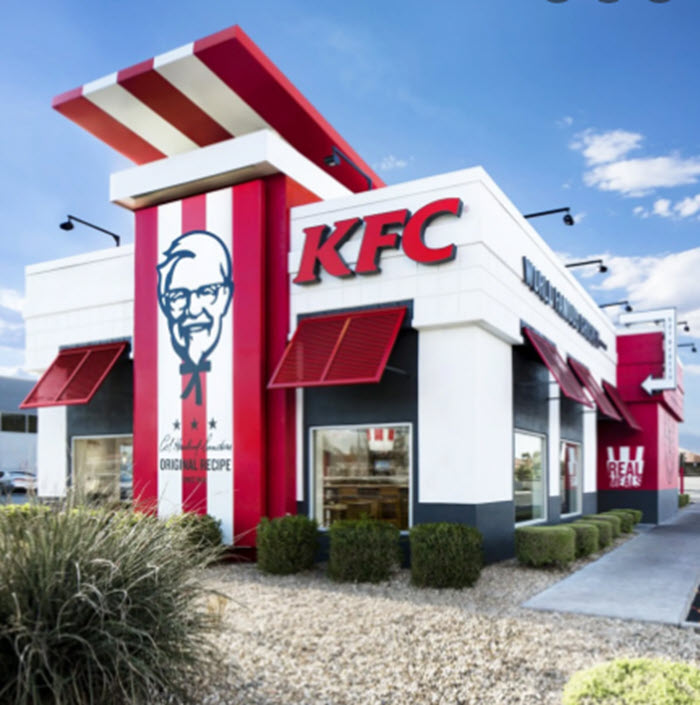 From the picture, it’s clear to see this happy couple is overjoyed. This is such a sweet moment for them, and you can see big smiles and probably a few happy tears. And if you assume she said yes, judging by her reaction; you would be correct! This special moment was captured and shared via Twitter. 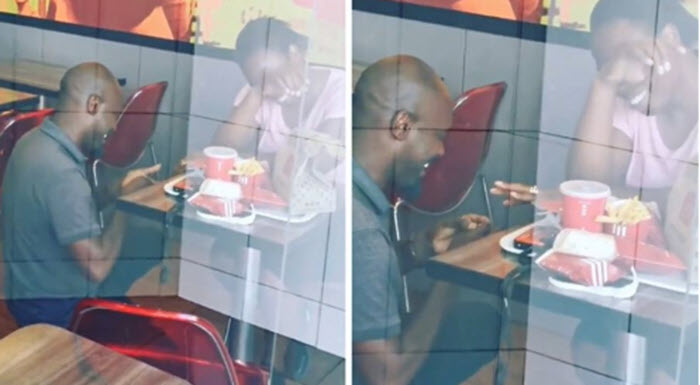 Raining on Their Special Moment

There are just those folks out there that can’t be happy for others or appreciate the sentiment behind even the most humble expressions of love. A local journalist from the area mentioned how their KFC proposal lacked class. She implied that they both should be ashamed for being so broke. It’s clear that this journalist thought her statement would garner lots of agreement from others. But, as this bully soon found out, she was virtually alone, and her cynical spirit stuck out like a sore thumb. Following the intense backlash, Anele removed the tweet and set her account to private. 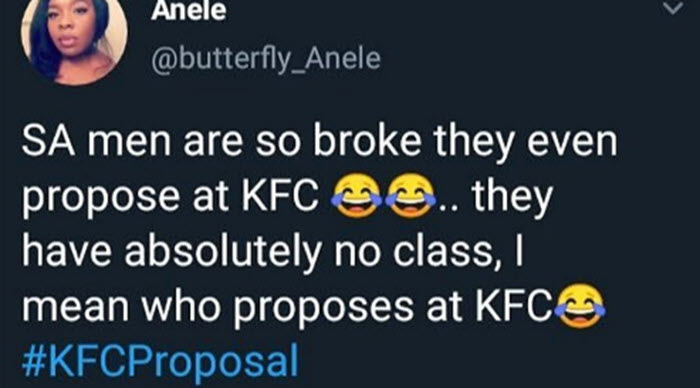 There’s absolutely nothing wrong with proposing to the love of your life anywhere, even at KFC. Anele had no clue who these people were or what this restaurant could mean to them. Perhaps it was where they first met or had their first date?

Love Deserves to Be Celebrated

Whether you want to make a grand declaration with expensive gifts and a super fancy engagement or just have something a bit more low-key and personal, the only thing that should matter is what your special moment means to you and your beloved.

Soon KFC learned about the couple’s engagement and spread the word asking folks to help them track down the happy couple. In their tweet, the company said, “re batla ho ba blesser,” which translates to we want to bless them. 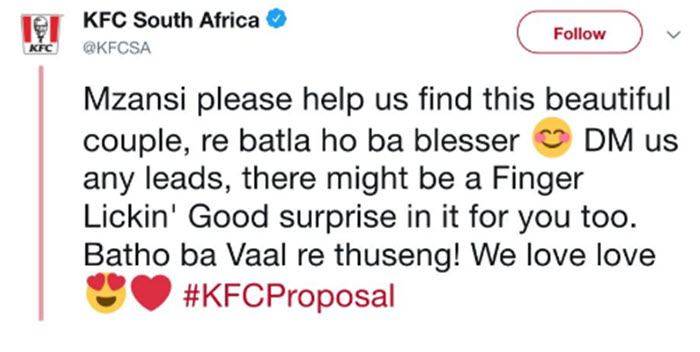 Naturally, I did Not Take Long

Since it seems like everyone is an internet detective these days, it only took a single day for Twitter to identify the couple and forward their information to KFC, who wished to celebrate their love. 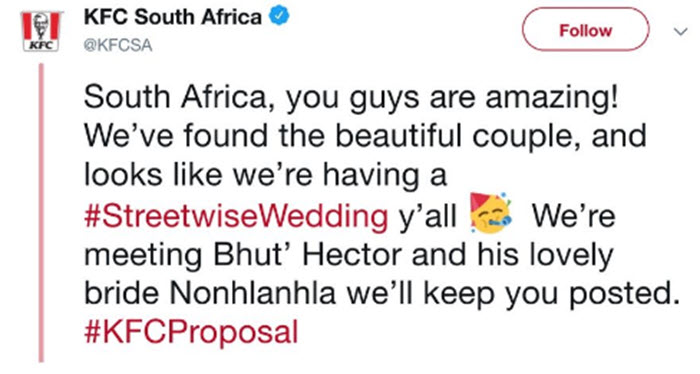 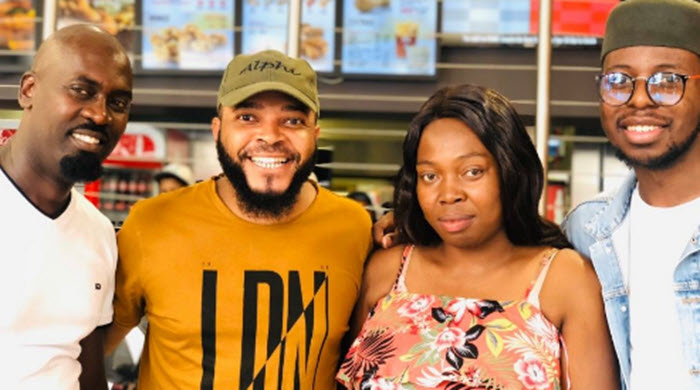 Other Big Companies Soon Joined In to Celebrate the Couples’ Engagement

Before anyone knew it, other companies, including Mcdonald’s, a KFC competitor, joined in to celebrate the couple’s engagement by offering them gifts, each more generous than the last! 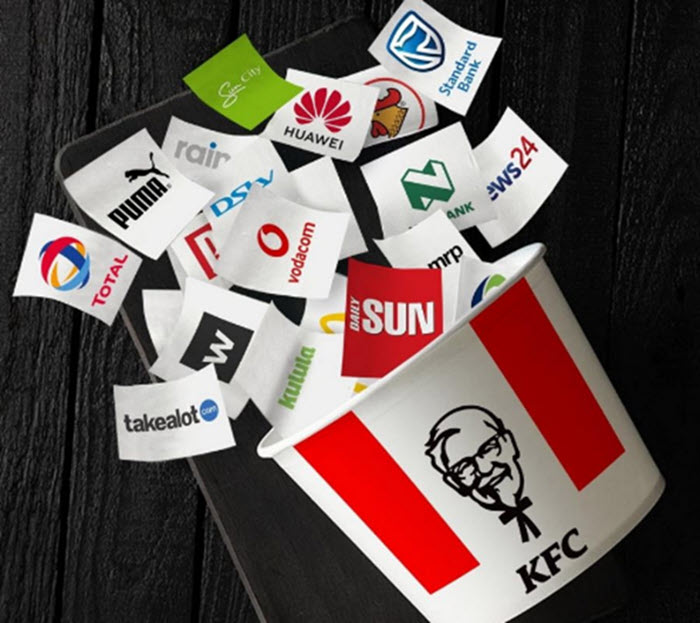 Mick D’s Wanted In on the Action!

The restaurant chain offered to send the couple on an all-expense-paid honeymoon and to share a VIP experience with Toni Braxton, who was putting on a concert in the area around that time. It’s said the average couple would spend between $4,000-$5000 on their honeymoon. 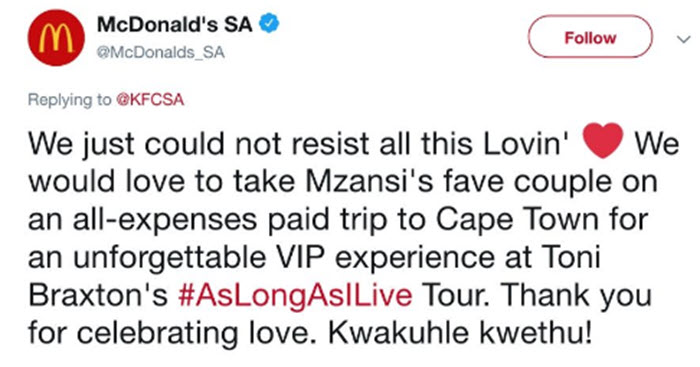 Canon Offers them a Camera

Canon gifted the couple with one of their best cameras, valued at $800. But they also went a step further and hired professional photographers to capture the memories of their special day. 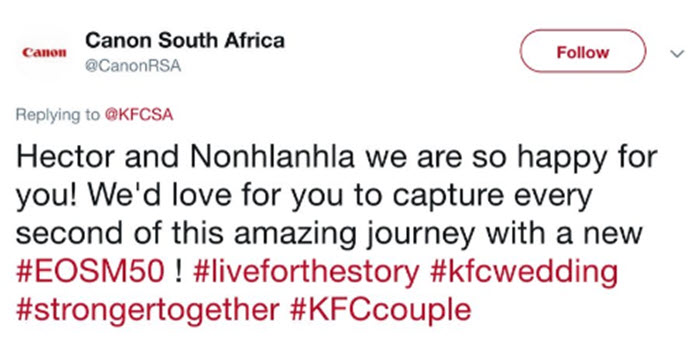 How About a Free Wedding Venue?

Ticket Pro Dome and Comic Con Africa were just a few of the many venues seeking to help this couple out. The venue is so large that exhibitions and concerts can hold up to 5,000 guests. 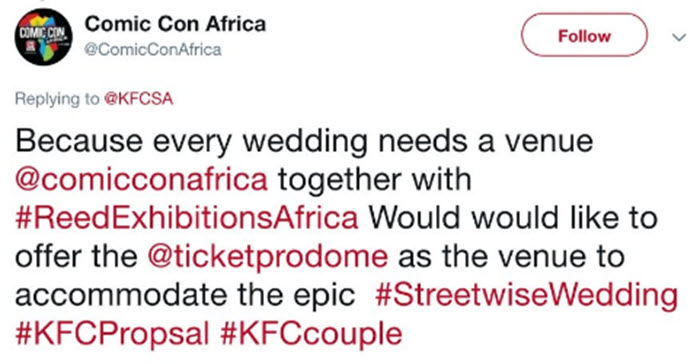 The Couple Receives a Second Honeymoon

Kulula offered the happy couple a second honeymoon that would give them much-needed time away to relax and underwing. The offer included a hotel, flight, and spa package!

Along with other companies, Puma also offered to keep the couple looking in high style for their big day. Hair salons, barbers, and tailers also offered the KFC couple their services free of charge should they want them.

Among other companies such as Land Rover, Lexus, and VW, Audi offered to donate vehicles. Uber also jumped into the mix, offering to care for their transportation needs.

Then, As Though Things Couldn’t Get Crazier…

Along with the many generous gifts, The Standard Bank offered to pay off any of the couple’s debts up to $20,000. Imagine what it would feel like to start a new chapter in your life debt free? 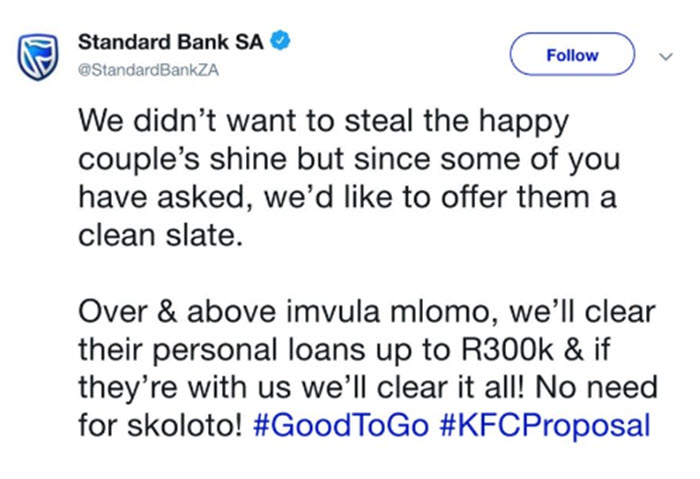 The Generosity Just Kept Pouring In

There were also offers to host the couple’s engagement party, which was bound to be a big event as it seemed most of South Africa wished to attend. There were many more companies willing to offer their support in this area. 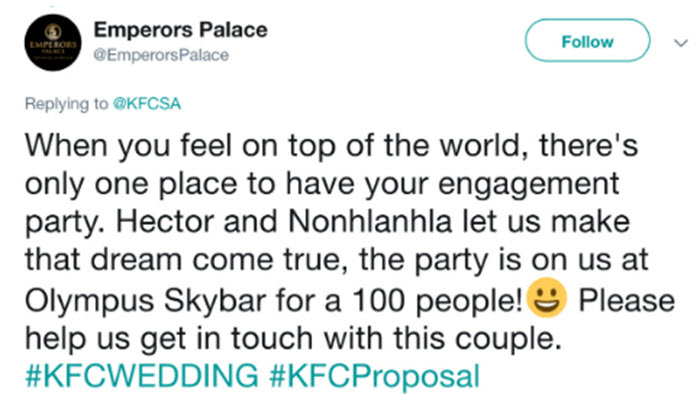 Local Business Pitch In As Well

Small businesses throughout the local community also offered their services to the couple.

Local barbers and salons offered to pamper the couple for their big day, and there were offers to throw a big bridal shower. This couple was bound to look their very best. 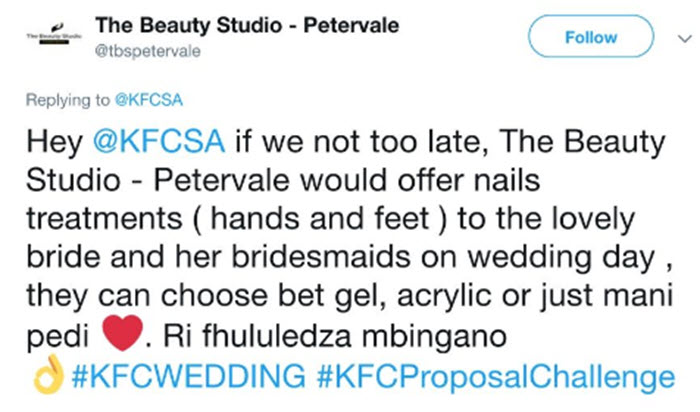 Who wouldn’t want a spa day?

Planning a wedding can be a stressful business, which is why a couple of companies came to their aid, offering them free spa services! What better way to prepare for your big day than getting a nice deep tissue massage beforehand. 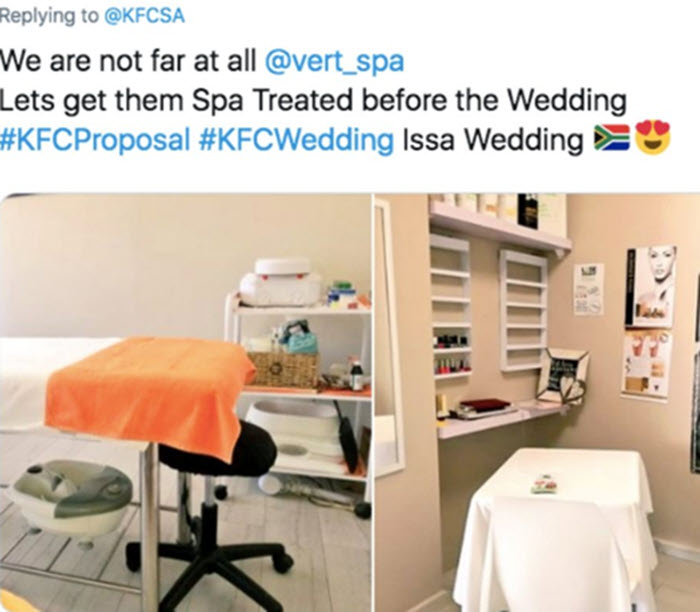 The Best Gifts are Often the Most Practical 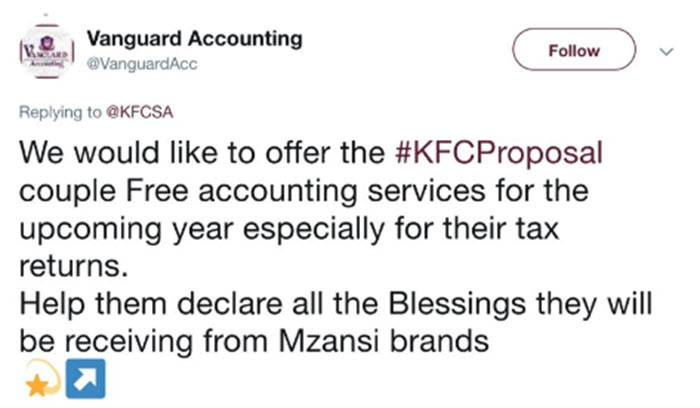 Even their Home Got Some Love 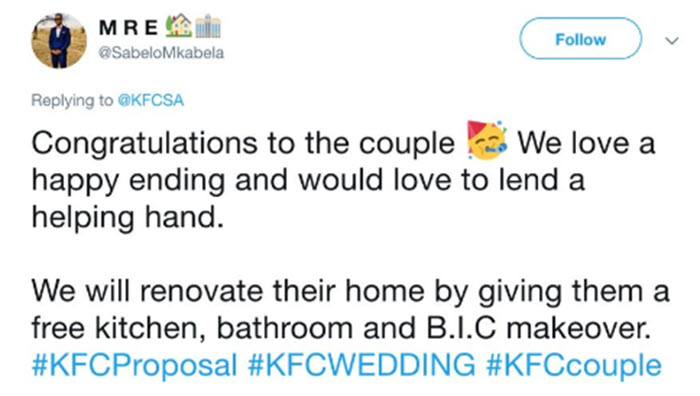 While Nonhlanha was probably very happy with the ring, Hector offered her, who could say no to upgrading to these beauties? 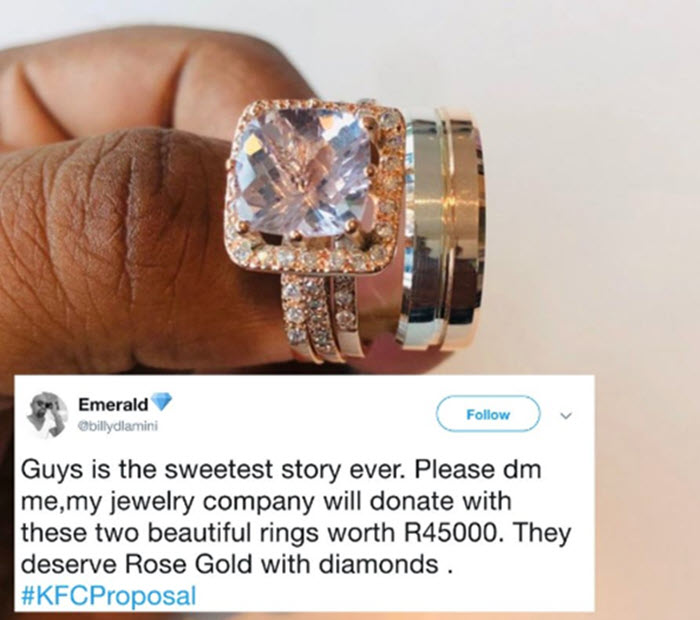 Calreb Accessories also offered them all the supplies they would need for a traditional South African wedding. And this stuff usually doesn’t come cheap. 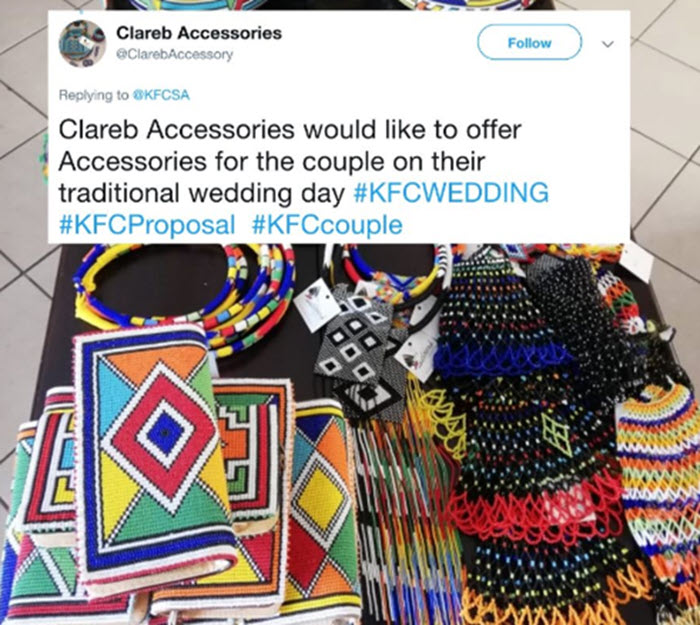 How About a New Career?

GM Logistics even offered them very nice jobs. I mean, come on? Right!?

Twitter Pretty Much Fell in Love with This Humble Couple

It’s safe to say that Hector and Nonhlanha became Mzansi’s favorite couple. And it’s hard to blame them. These two are so sweet and down-to-earth. Who wouldn’t want to bless these nice folks?

Everyone Was Blown Away

The outpouring of love and support this couple received was beyond belief! It’s so amazing seeing a community coming together to celebrate a couple’s love. These acts of generosity had a lot of focus, feeling quite proud to be from South Africa.

We All Need to Hear About More Stories Like This!

It’s so refreshing to focus on the good things in life, especially when those occasions can seem far and far between. Celebrating love is always something that shines a light into all our lives. 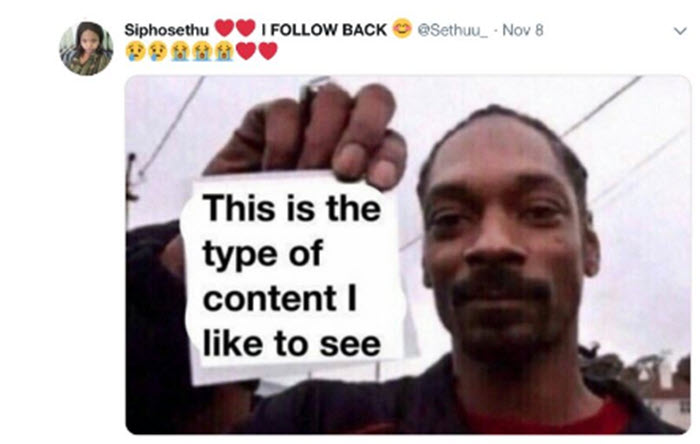 And In Case You Were Curious About Their Wedding Date

The couple officially tied the knot on December 31, 2019. Yes, one day before 2020. It looks like all those blessings they received were just in time! KFC also offered to hire a wedding coordinator to help ensure everything went off without a hitch! 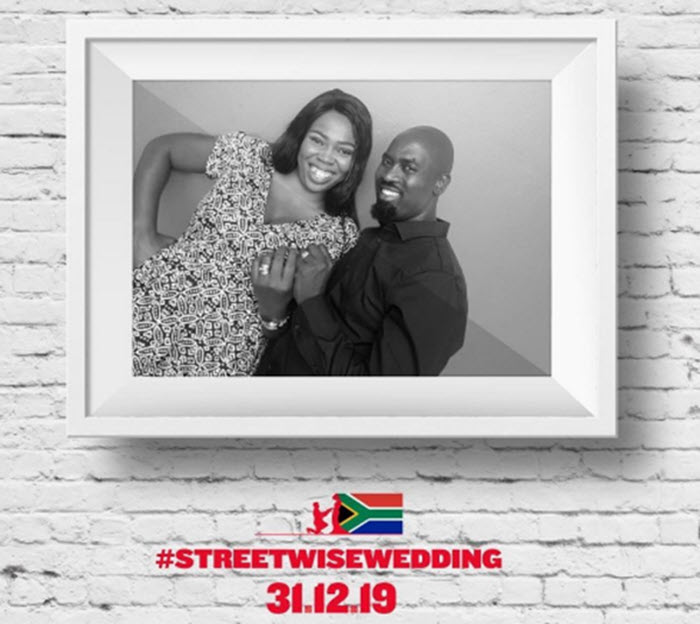 Of Course, Everyone Wanted to Know the Most Important Question

People were asking if KFC was also catering for the wedding? I’m not a big fan of attending weddings, but if they’re serving KFC, I’m definitely going!

You can also watch a video of Hector and Nonhlanhla’s heartwarming proposal in KFC below.

Here’s a news story about their proposal.

Plus, here’s a video of their wedding!