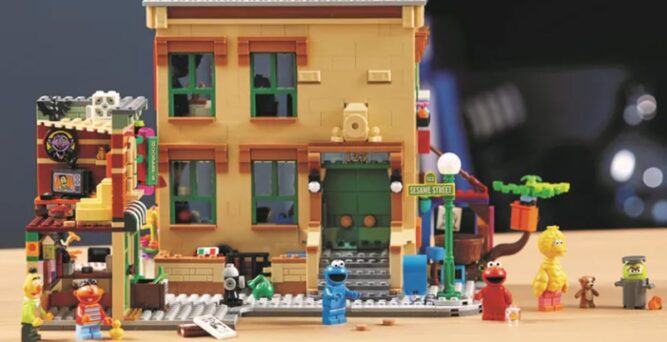 Although Sesame Street has been around since 1969, they’ve never collaborated with another hugely popular pop culture icon that’s been around even longer than Sesame Street: Lego. However, a new plan is in place to change that. A Lego builder and Sesame Street super-fan put up the idea for a Sesame Street Lego set on the Lego Ideas collection, which gives Lego builders the opportunity to propose ideas and have other Lego builders vote on them. This will mark the very first time the beloved Sesame Street characters like Ernie, Cookie Monster, Big Bird, and more are in Lego form as minifugures.

The Lego Sesame Street set includes authentic details from the famous New York City neighborhood where the Sesame Street characters live. For example, you’ll find Bert and Ernie’s apartment and the legendary nest of Big Bird, which is where adults finally got to meet Mr. Snuffleupagus. The set also includes buildable minifigures like Elmo, Cookie Monster, and Big Bird. We’re also delighted to know that it will include iconic locations like Oscar the Grouch’s garbage can and Hooper’s Store. You’ll enjoy the reminders of some special Sesame Street moments and songs as well.

Ernie’s famous rubber duck is there, also. When it’s built, this set, which includes 1,367 pieces, will measure 13.5 inches wide, 8.2 inches deep, and nine inches high. The vice president of global marketing for Lego, Federico Begher, said via a press release that this is the first time in the history of Lego Ideas that the company has had the chance to create a set with brand new mini-figures, so it was exciting for Lego as well as for Sesame Street.

Although it looks like a child’s toy, this special Lego set is designed for adults age 18 and older, so it’s more geared to fans of the show who are kids at heart, not kids in age. If you want to enjoy this set with your kids, just make sure you’re with them and helping them at all times.

You can buy the set at Lego.com and in Lego stores for $119.