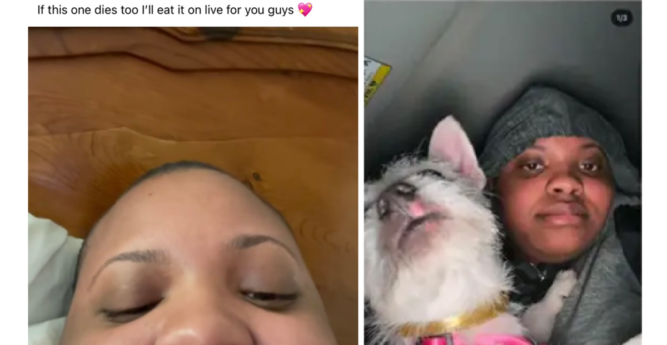 Trigger warning: This story has details of abuse to an animal that some readers may find disturbing.

A social media influencer named Lovely Peaches is anything but lovely as reports emerge about her abusing her pet dog. Allegedly, the woman has built an entire empire as an influencer that was based completely on lies and falsehoods. The young woman is 20 years old and a mother, but now she finds herself in a legal nightmare after she reportedly abused her dog for the purpose of increasing her followers on the social media giant, Instagram. In a report by The Sun, the woman, Brittany Johnson, reportedly sprayed perfume directly into the eyes of her little dog, a six-month-old Jack Russell.

She also reportedly picked the little dog up by its neck and even claimed to have broken his legs. This incident occurred on January 20 and people started sharing the videos that the woman posted to Instagram. It was two days later that she was arrested by police officers at the Motel 6 in Georgia’s DeKalb County. She was kicked off of Instagram and TikTok because of the abuse, but she has already created a new TikTok account. She said that if her dog dies, she plans to eat it. According to the police, she will no longer be allowed to keep animals. When the cops questioned her, she admitted to making the statements.

Lovely Peaches returned to social media after being banned from Instagram and TikTok. Peaches’s new TikTok has over 600k followers. In a FB post, she said if her dog dies she will eat it.

She said that she did this so that she could get more social media followers. She won’t be able to have any animals until this case is cleared. Meanwhile, her Jack Russell Terrier has been taken into Animal Services custody, thankfully, so at least he is safe from further harm by this individual. The dog’s name is Max and Johnson reportedly surrendered him voluntarily to Animal Services.

Another influencer, Def Noodles, posts videos to YouTube and he posted videos of Johnson with blurred-out images that were too disturbing to share.