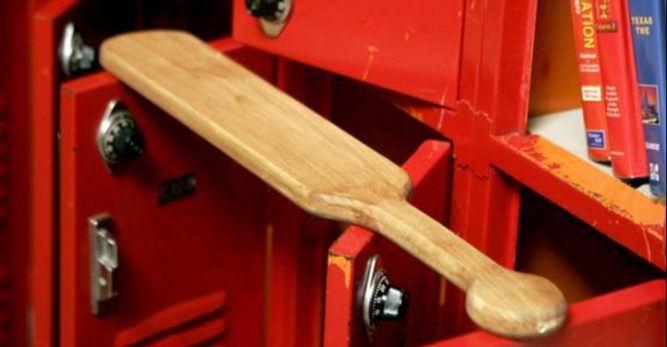 One subject that still sharply divides many within our society is the subject of corporal punishment. While for parents, spanking children is still technically legal in most states, there are restrictions that are related to injuries sustained from the punishment. However, in most school districts, spanking has been banned for quite a few years now. Many of us, born before a certain time, can remember when teachers used to spank students in front of the class or send them to another school administrator’s office to be spanked. A Texas school had been having issues with misbehaving children, so the school district decided to bring back corporal punishment.

The idea of this form of punishment is to be a “last resort” for students who refuse to listen to a teacher’s instructions and can not otherwise be disciplined. We all know that behaviors such as creating disruptions in class or bullying are big problems facing a lot of schools. And while paddling may seem like an extreme remedy, there are many parents who wholeheartedly support this policy. In Texas’ Three Rivers Independent school district, the board accepted that not every parent wants their child to be subject to this policy. And because of this, the district decided to implement an “opt-in” approach in which a parent gives written and verbal consent giving the school permission to implement paddling.

Corporal Punishment Banned at Marfa ISDHow do you feel about spanking as punishment in your child's school?

And should the parent become uncomfortable with the practice, they can choose to opt-out of the program at any time. It also seems that the paddling reinstatement trend is catching on as 27 other school districts have also brought the practice back. However, John B. King Jr., the former Secretary of Education, is leading the resistance against this practice. In a letter he wrote explaining why paddling should remain banned, he pointed out that at least 40,000 students or over one-third of the students who are paddled are African American.

Three schools in Texas are reintroducing corporal punishment for bad behaviour.Staff will be able to use a wooden…

Racial disparities aside, the concept of corporal punishment is little more than a shortcut that takes the place of serious counseling and gaining an understanding of why a child is misbehaving. One approach requires lots of hard work, patience, setbacks, and frustration, while the other simply requires a good swinging arm. Not to mention the fact that we live in a day in age where children are bringing firearms to school to “even scores” with other students and teachers. And for a Second Amendment friendly state such as Texas, it’s reasonable to ask if this policy could inspire more school shootings. For folks who grew up with spankings, such as myself, they might be inclined to think what was good enough for them as children are good enough for kids today. However, it’s impossible to say just what impact spanking has had on other children as we are often isolated in our own bubbles when it comes to remembering our childhoods. Plus, there are many things that were done in the past that we do not allow today, such as denying minorities such as women and African Americans their rights.

Were you aware that there are still schools that exist that allow for corporal punishment? This means that teachers…

Posted by U.S. Alliance to End the Hitting of Children on Wednesday, November 2, 2016