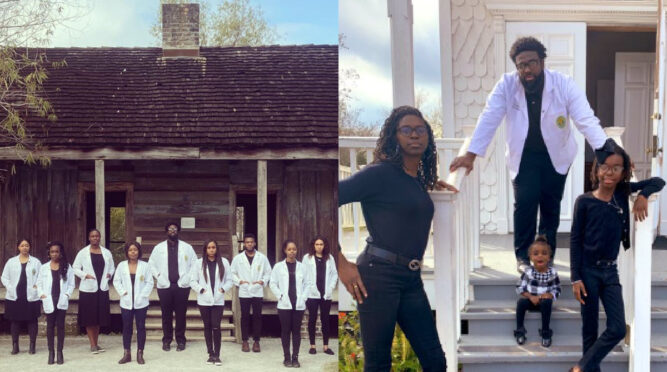 They say a picture is worth a thousand words; however, no amount of words can do one photo going viral on social media proper justice. The photo features 15 Tulane medical students wearing their white lab coats while standing in front of what was 160 years ago slave quarters on a plantation in South Louisiana. Most slave quarters consisted of dirt floors, had very little if any furniture and the overall living conditions were sickening. Slaves were not considered human but rather property, and their masters could do with them as they pleased. Slavery also helped enrich America as having virtually zero-cost labor allowed many plantation owners and companies to reap billions of dollars in profits. Slaves even build the White House.

Thankfully, this practice was put to an end after a long and bloody Civil War. However, the shadows of this horrific chapter in American history still exist today as Black Americans still deal with issues related to racism and discrimination. But, that isn’t to say Black Americans have not come a very long way since those times; despite the best efforts of many in power, the children of slaves worked hard to ensure each succeeding generation would go places and do things they could not. Nevertheless, it’s safe to say that no slave could have ever dreamed of the day when young and bright Black medical students would be posing for such a powerful picture.

We are our ancestors’ wildest dreams.✨

In the background, an original slave quarter.
In the foreground, original descendants of slaves and medical students. #whatatimetobealive #yeahwecandoboth pic.twitter.com/INOUMmc1cx

Russell Joseph Ledet is the person behind the heartwarming photo.

Russell also tried to attract the attention of former First Lady Michelle Obama, who we’re sure would be equally moved by the photo.

While finishing medical school is a very high honor, Russell also made a point to mention that the thing he was most proud of is being a part of a loving family.

Proudest accomplishment is maintaining my family unit. They are the core of everything I am and everything I ever will be.
Family motto: don’t leave me cuz I’m not leaving you#TheyComeFirst #LedetLineage pic.twitter.com/EDO1WCEpjz

Russell is a proud father with two brilliant daughters.

On Twitter, the photo was received with high praise from thousands.

@CNN @NPR @GMA @PEOPLE @ABC now comes the real work. We want to put framed copies of this photo in 100K classrooms nationwide. How do we get this effort started because if we aren’t inspiring these babies that are coming behind us, it’s all just a stunt.#TheBabiesFirst pic.twitter.com/kCtTG8IL5T

They noted how the 15 students beamed with pride as they stood before a monument signifying the hardships and horrific struggles their people had to endure so they could one day realize a brighter future for themselves and their families.

GOD I love this picture so much. I may have to recreate it since the plantations where my ancestors were enslaved is 30 mins away from me. Thank you for doing this.

You can also watch a video about this inspirational story below.