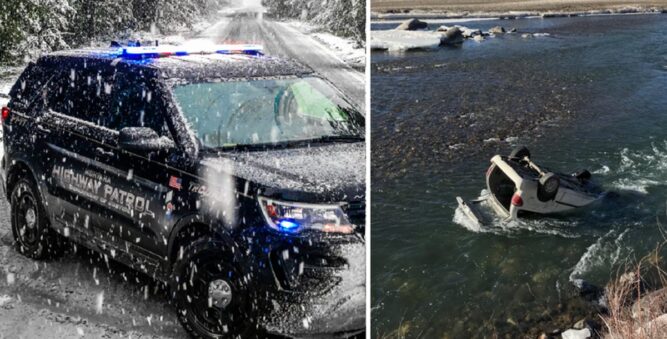 Last Thursday, a woman was driving near Emigrant, Montana when she found herself in a terrifying situation. It’s not been reported as to how she ended up where she was, but her car somehow landed upside down in an extremely icy Yellowstone River. KPVI-TV reports that first responders were on the scene within 18 minutes after receiving a call. One of the first responders was a fairly new Montana Highway Patrol Trooper named Connor Wager. As soon as he got the call, he rushed to the scene, where he didn’t even hesitate before moving quickly. He knew exactly what he had to do.

In a Facebook post on the Montana Highway Patrol’s Facebook page, the department gave a play-by-play on how it all went down. The report says that Officer WAger responded to what turned out to be a rollover crash near Emigrant, Montana. When he arrived on the scene and saw what was happening, he realized that the vehicle was on its roof upside down in the river. Meanwhile, the front of the car was completely submerged and the driver was trapped inside. The water was nearly at freezing temperature, and this made the situation even more life-threatening, although drowning was a huge concern as well.

As two deputies held a rope that was attached around him, Wager plunged into the icy water and pulled the woman out. He then proceeded to make his way through a very fast-moving current to the vehicle. He couldn’t get the rear hatch of the vehicle open because of the strong current, so he broke the rear window with a tool designed for that purpose. From there, he pulled the woman from her vehicle. Then first responders on the shore were able to help Wager and the woman get back to safety.

Thank you Trooper Wager for your heroic efforts!

The woman was treated by EMS and was unharmed, while Trooper Wager had minor injuries.

He was treated at a nearby hospital before being released. Here’s a video of the car.