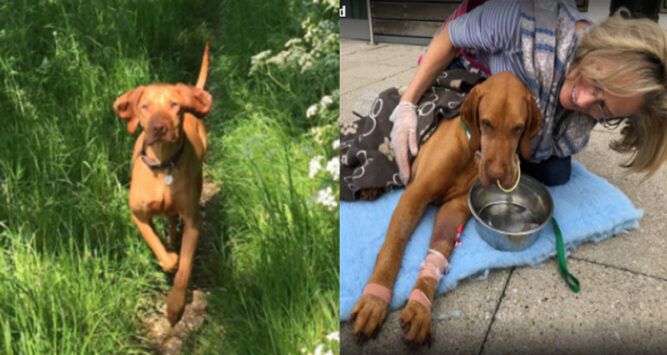 As pet parents, we love our animals as though they were our children. And just like raising small children, one mistake, one lapse in judgment, can end in tragedy. The only thing more crushing than losing a beloved pet is knowing that you could have done something to prevent their death. People reports, Kate Chacksfield, lost her beloved Ruby in February 2019 after the dog ate brownies sweetened with the sugar substitute xylitol. Once consumed with grief, Chacksfield is now focusing her pain to educate other pet parents about the hidden dangers of this sweetener. According to Metro, Ruby had sneaked inside to nab some brownies and ate two in a blink of an eye.

However, it turns out that xylitol is a sugar alcohol and is extremely toxic for dogs and is known to cause seizures, low blood sugar, liver failure, and can result in death. Sadly, this is what happened to Ruby. Just 36 hours after consuming the brownies, the Vizla became very ill. Her health would soon deteriorate rapidly over the next seven days. She remained in the hospital for nearly eight days, and Ruby’s medical bills totaled close to $13,000; she did not pull through in the end. 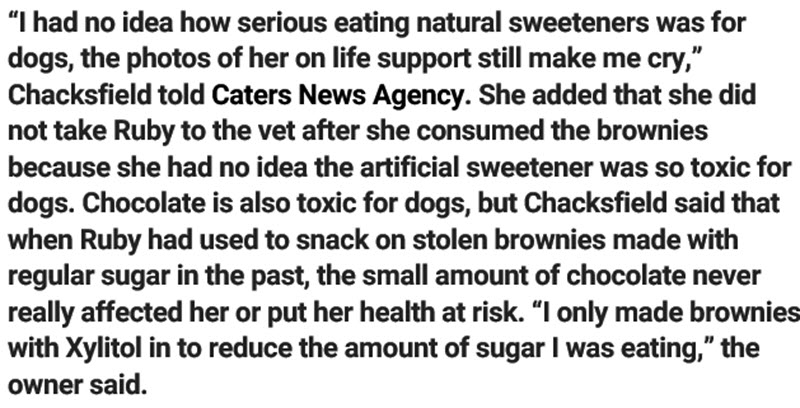 Chacksfiled added that she wishes she had known about xylitol’s dangers before baking the brownies because she would have rushed Ruby to the vet right away after she ate the treats.

Chacksfield first adopted Ruby when she was only a pup and instantly fell in love with the sweet dog.

She says she doesn’t want this to happen to any other pups.

Xylitol is a very common sugar substitute found in many sugar-free products such as gums, sweets, peanut butter, and spreads. However, this substance is absolutely toxic to animals, as are other natural foods such as grapes, garlic, onions, raisins, raw eggs, raw meat, and macadamia nuts. All the above-listed foods can result in serious health issues, even death, for your dog.

FacebookIf you believe your dog had eaten something toxic or dangerous, please do not hesitate to take them to your local vet immediately instead of waiting for a negative reaction. Because as you can see from this story, by then, it could be too late.