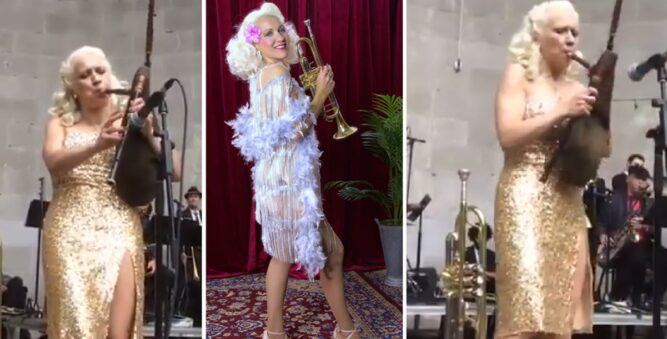 Gunhild Carling is a Swedish multi-instrumentalist who is profoundly talented. She’s made quite a name for herself in the music world and is famous for playing many different instruments, and often at the same time. As it turns out, she’s also quite an amazing dancer. Gunhild is perhaps most famous because of her work with trumpets, specifically playing three trumpets simultaneously. She’s even been known to switch between ten different instruments when she’s performing. She even tapdances and juggles, if you can believe it. Is there anything this young woman can’t do?

Gunhild has been featured on Post Modern Jukebox with Scott Bradlee, where she put a 1920s twist on the 1980s Madonna song “Material Girl.” In addition to bagpipes and trumpet, Gunhild also plays the trombone, harp, and recorder, and she can also sing. Oh and did we mention that she plays several string instruments, including the ukulele and the banjo? In 2013, she had the honor of performing with her band called Carling Big Band at the Ruby Jubilee of King Carl XVI at the Royal Palace in Stockholm. The king liked her so much that he invited her back in 2016 to perform at his 70th birthday celebration.

Check out Gunhild Carling Calendar Poster 2021! Available for the next 1 day via @Teespring: https://t.co/5FjhzrcnA0

If you can make a king happy with your music, that says a lot. These guys can get anyone in the world to perform for them, after all. One of her most known performances was in 2010 at Allsång på Skansen. She talked about playing the trombone in a TED talk, specifically TEDxArendal. She shared that the trombone is her favorite instrument. In the talk, she told the audience that she has a lot of respect and affection for the early jazz artists, especially those from the all-important New Orleans period when jazz really got its start and put New Orleans on the map musically.

In the video below, Gunhhild performs jazz on bagpipes in an unforgettable performance. Enjoy!