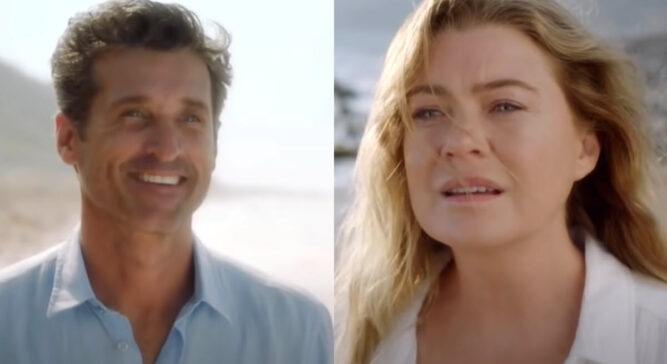 It’s hard to think of very many events that could redeem 2020. However, fans of the hit ABC drama Grey’s Anatomy have a huge reason to celebrate after the show gave them an early Christmas gift in the form of returning the most beloved character on the show. Derek “McDreamy” Sheperd (played by Patrick Dempsey) stunned millions of fans with his surprise return during the season 17 premiere of the long-running medical drama. It’s unknown just how long the cast and creators kept this big surprise under wraps. In his return scene, we see Meredith (played by Ellen Pompeo) meeting with Derek at a beach.

The meeting happens just after Meredith suddenly collapses in the Grey Sloan Memorial Hospital’s parking lot, and it looks to be a near-death experience dream sequence. Krista Vernoff (the show’s creator) talked about the huge shocker with Deadline and spoke about how she and Ellen could come up with the idea. She said:

“I had this imagining of a beach motif throughout the season, and I called Ellen, and I said, what if we bring back, I don’t know, some dead character that you could dream of on the beach, that would be so fun for the fans. And she said, let’s get Patrick.”

As ecstatic as I am about McDreamy's return…@GiacomoKG persormance was OUTSTANDING! Well done for handling it so sensitively and for an amazing portrayal ❤️ pic.twitter.com/4Scgsjwflx

In an exclusive interview with Deadline, Dempsey, Vernoff and Pompeo reveal how the idea for McDreamy’s #GreysAnatomy return came about, how long he will stick around, how the scene was filmed and morehttps://t.co/ut83w3OpbB

Best of all, McDreamy’s return won’t just be limited to that one scene. Both Krista and Patrick reassured fans via Deadline that they will see more of Patrick Dempsey in future episodes, but they did not reveal details.

SPOILER ALERT: McDreamy returns in Grey’s Anatomy! 😱🤯😍#GreysAnatomy trends in the US and Philippines after fans were surprised with the return of actor Patrick Dempsey as Dr. Derek Shepherd in a dream-like sequence for the show’s 17th season premiere. 📸: Krista Vernoff pic.twitter.com/jdxVECN9OZ

As most fans know, Derek was killed in a car accident way back during Season 11. For millions of fans, his departure from the show has always been a sore spot as for the first 11 seasons, Patrick Derek Shepherd was a central character on the show. The doctor’s “It’s a beautiful day to save lives” line has become a big part of pop culture.

@EllenPompeo @PatrickDempsey @KristaVernoff my mom literally had to pull over this morning when I told her what happened with McDreamy’s return last night. You have no idea how much it means to people — especially those who have lost their great love. Thank you for this gift. ♥️ pic.twitter.com/8Pceb3WTm8

You can watch a video talking all about the return of McDreamy below.