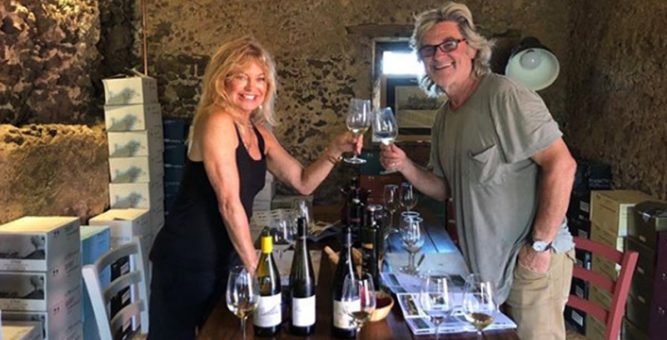 It’s rare to see a marriage or romantic relationship these days last for 37 years. Because relationships are a challenge, many people find it’s easier to just throw in the towel and start over. Starting over is much easier than making it work with someone who you’ve got decades of baggage with. Imagine if you’re with someone from the time you’re in high school or college. Together, the two of you go through all of the trials of youth, with each of you making mistakes and forgiving each other. You end up with a lot of water under the bridge and again, the baggage that comes from spending a lifetime with someone.

When it comes to celebrity relationships in places like Hollywood, it’s even rarer to see a couple go the long haul. One couple who has proven that it’s possible to find true love in Hollywood is Goldie Hawn and Kurt Russell. Most people agree that they’re one of Hollywood’s most adorable couples and they’ve made it work. What’s more, they seem genuinely happy and in love with each other. They’ve never gotten married, and there’s nothing wrong with that. They don’t seem to need a marriage license to have a long successful relationship. They’ve been together and in love since 1983.

Happy birthday sweetheart ❤️ I love you. Fun doing the Irish jig with you on your birthday after all these years. ☘️

The last time fans saw this gorgeous couple on screen together was in the 1987 movie “Overboard,” and they have beautiful chemistry both onscreen and off-screen. They’ve been together for more than three decades. During a 2014 interview, Kurt Russell was promoting “Art of Steal,” his GoGi wine line. During that interview, he shared with the audience what he got his beloved Goldie for their 31st anniversary, a place called “The Wine Saloon.” The Wine Saloon sells his GoGi wines with his stepdaughter Kate Hudson’s Hudson Bellamy Wines, along with Ampelos Cellars.

Kurt said that he’s been making wine for the last several years and his favorite is a high-end pinot noir and a high-end chardonnay. That’s where he took Goldie to celebrate their anniversary and for Valentine’s Day, which incidentally, also is their anniversary. As it turns out, the first time they ever had a date just happened to be Valentine’s Day. It wasn’t planned that way, exactly. It was just lunch. But they liked each other and decided to have lunch again. Goldie says that the secret to their long and happy relationship is “Love, gratitude, compassion because sometimes every man or every woman will drive their partner crazy. Family. Fun. Laughs. Sex.”