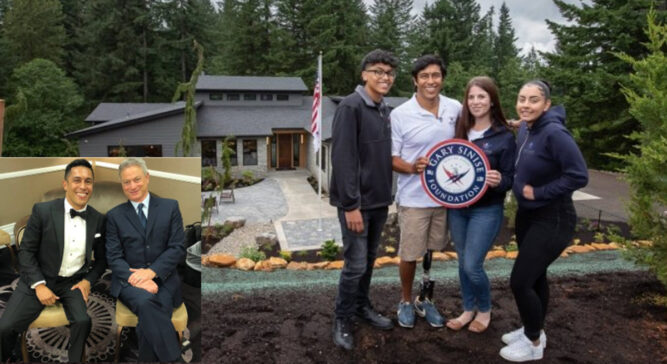 The debt our country owes the brave men and women who keep us safe is one we could never repay. However, so many of our brave soldiers return home not whole in many ways. Often they are missing a piece of themselves psychologically, but some leave a part of themselves on the battlefield physically. Warfare is an ugly business that not only takes human lives, but it can also maim the mind, body, and soul. Thankfully some can step in and make the lives of a few of these brave heroes a bit easier, such as retired U.S. Army Staff Sargent Rico Roman.

While he was away from home fighting to protect our country, Roman endured many hardships. And it was on the battlefield that he would make his biggest sacrifice when he lost his leg in combat. But thankfully, Roman is alive and well and living the good life in his brand new home! Roman enlisted in the Army back in 2001, and since that time, he was deployed overseas four times within the following six years. However, during his last deployment in 2007, he was sent to Iraq. There, his team was on a convoy mission when suddenly an improvised explosive device (IED) went off, damaging their humvee.

Roman would spend the following three months resting in a hospital bed, during which time he had to undergo several surgeries on both of his legs.

After a year of unimaginable pain, the soldier finally made the agonizing decision to allow one of his legs to be amputated above the knee.

Now, it would be understandable if Roman decided to allow himself to sink into deep despair after losing his leg. But instead, the hero channeled all of his energy into getting involved in adaptive sports.

Soon he would meet Gary Sinise, a Hollywood actor who dedicates his life to honoring and supporting our brave service members via his Gary Sinise Foundation.

And the foundation’s R.I.S.E program builts adapted smart homes for soldiers like Roman. Best of all, these homes are all mortgage-free!

In 2017, Sinise’s foundation started work on building the house of Roman’s dreams, and in July 2020, Roman and his family were able to walk through the door of their new home.

The soldier was awe-struck by all the incredible features designed to make his life a lot easier.

The home includes a shower with a bench, a stairlift, and lots of space in his adapted bathroom.

The home also has a dedicated space for all the awards and honors the Purple Heart recipient earned for his service.

But, Roman is really looking forward to enjoying all the freedom and new sense of independence his home will give him.

What a wonderful way to thank an American hero for his service to a grateful nation! Thank you, Gary Sinise, for making all of this possible and for transforming your gratitude into such a life-changing gift.