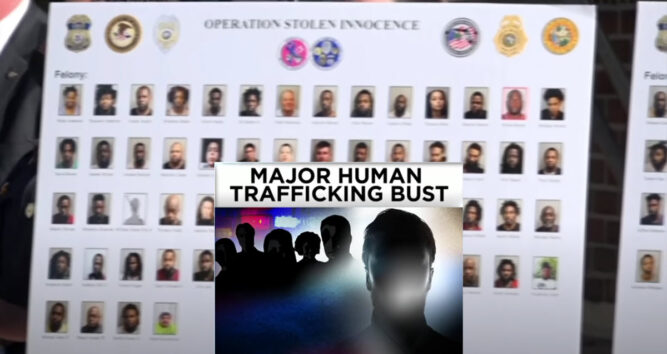 In Florida, authorities are saying that a sting operation has resulted in over 170 arrests. These busts come after a two-year investigation into a major child sex trafficking ring operating within the state. The suspects now face charges ranging from human trafficking of a minor to the solicitation of prostitution. The investigation was called “Operation Stolen Innocence.” Tallahassee Police Chief Lawrence Revell explained that the operation started in November 2018 when officers discovered images of a teenage girl advertised on a website devoted to the exchange of sex for money.

Police had initially set up the sting to rescue the girl, but it ultimately led to dozens of arrests.

“This investigation is a testament to how diligent our investigators work to enhance the quality of life for everyone in this community, especially our vulnerable population,” Revell said in a statement. “They worked tirelessly to bring justice to the victim in this case and were able to make an unprecedented number of human trafficking related arrests.”

Much of the evidence came via electronic sources such as posts on social media and text messages that took officials “months to evaluate.”

Over 170 people have been charged in recent months as part of a two-year investigation uncovering a sex trafficking network in Florida. @ChristianPost https://t.co/0XylCbrDaX

The U.S. Attorney’s office, state and local law enforcement officials, and the Department of Homeland security worked together to make this operation a success.

"A number of defendants told investigators during sworn interviews that the girl’s mother wouldn’t allow anyone to have sex with her unless they brought money or drugs."🤬https://t.co/KMBOlQRfds

Elizabeth Bascom, a Tallahassee police investigator, told reporters that the teen girl who worked with the police suffered “horrific” abuse and sexual exploitation, which likely began before she turned 13. The girl is expected to testify against several suspects in court.

“She was able to say that this has seriously impacted her life, and it is very difficult at times,” Bascom said. “But she is working to get her life back.”

“It is difficult to comprehend the depravity of these criminals who prey on the most innocent in our society,” added Kevin Sibley, acting special agent in charge of Homeland Security Investigations Tampa. “Thanks to the collective efforts of the Tallahassee Police Department and HSI special agents, our local communities are significantly safer today.”

For more on this story, you can also watch the video below.