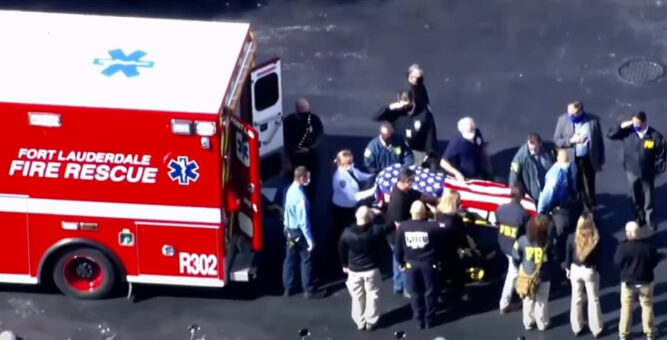 On Tuesday, two FBI special agents were killed in Sunrise, Florida when they were executing a federal search warrant. The agents were Daniel Alfin and Laura Schwartzenberger, and they devoted their lives to investigating crimes committed against children. They were at an apartment complex in the city near Miami, Florida. In the raid, three other FBI agents were wounded, with two being taken to the hospital and later released. The suspect in the slaying of these agents also died at the scene, but the investigation remains ongoing. The Special Agent in Charge of the Miami FBI is George Piro, and he released a statement.

Piro said that the shooting and the loss of these dedicated special agents is a “very dark day” for the agency. Alfin and Schwartzenberger had reputations for being exemplary in their efforts in the field. They worked diligently to curb child abuse by educating students about the dangers of child sex crimes and also through their excellent investigatory work. Piro added that the profession that they all chose is “fraught with danger,” and Tuesday illustrated that very grim reality because it took two of the FBI’s top special agents. A native of New York, Alfin, age 36, played a role in what was called an “unprecedented” investigation into child exploitation.

He started his career in Albany, New York back in 2009 and was assigned to the FBI office in Miami in 2017 to specifically investigate crimes against kids. He was recognized as an expert in this field, particularly in regards to computer forensics. Schwartzenberger worked with school-aged children to help them learn how to be safe. She was born in Pueblo, Colorado and joined the Bureau in 2005. At that time, she was working in the New Mexico office and has served in Miami since 2010. She has worked specifically with child exploitation crimes for seven years.

Watch the news video about this story below.