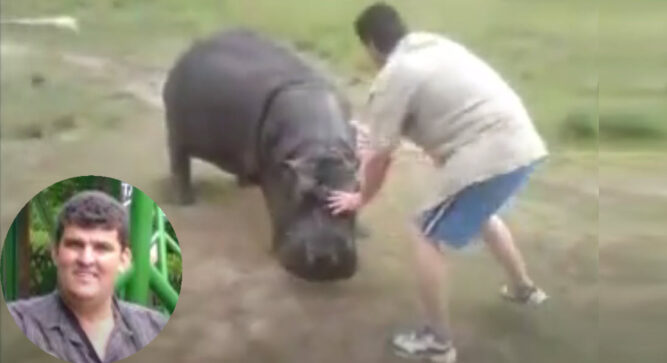 As pet parents, my wife and I enjoy an enormous sense of love and joy from caring for our animals. Owning over a dozen cats, we always joked that if they were big enough, they would probably eat us. While we always laugh at this quip, there is a dark ring of truth to it. This holds especially true for wild animals. But, for many folks who keep wild animals as pets, the gentle and loving interactions they have with these creatures, 99 percent of the time often lulls them into a false sense of security. After all, who would want to keep a pet they felt on edge with all the time?

In 2011, a South African farmer named Marius Els was tragically killed after being dragged into the water and mauled on his 400-acre farm. The man’s mutilated body was later discovered submerged in the river. Years before, the baby hippo was rescued from a flood and adopted by a family until it became too big. That’s when Els offered to take the creature in on his farm, and soon the two struck a close friendship. Els named the hippo Humphrey. The animal had been around humans its entire life, even learning how to swim with the help of his first human family.

However, one Sunday morning, the 40-year-old man who always said Humphrey was like a “son” to him was confirmed dead when paramedics arrived. Jeffrey Wicks, a Netcare 911 spokesperson, said that paramedics were called out to the Els home located on the Vaal River river banks. He said:

Humphrey, who was six-years-old, was discovered as a calf and raised by humans in the Free State province. Els, a former Army major, used to ride on the animal’s back, feed him, and even brush Humphrey’s teeth.

However, according to neighbors, there were warning signs that Humphrey’s wild nature was overtaking his normally docile temperament. He was sighted several times wandering away from Els’ farm and onto a nearby golf course.

But, the animal would always return when Els called out for him.

Despite their playful and cherubic appearance, hippos are considered one of the deadliest and most aggressive animals on the planet, especially when protecting young calves.

They are considered the most dangerous animals in Africa, killing more humans than any other creature, including lions and gorillas.

Hippos can be extremely aggressive toward humans and can attack people on land or in boats with no provocation.

Shortly before his death, footage of Els interacting with Humprey went viral on youtube. 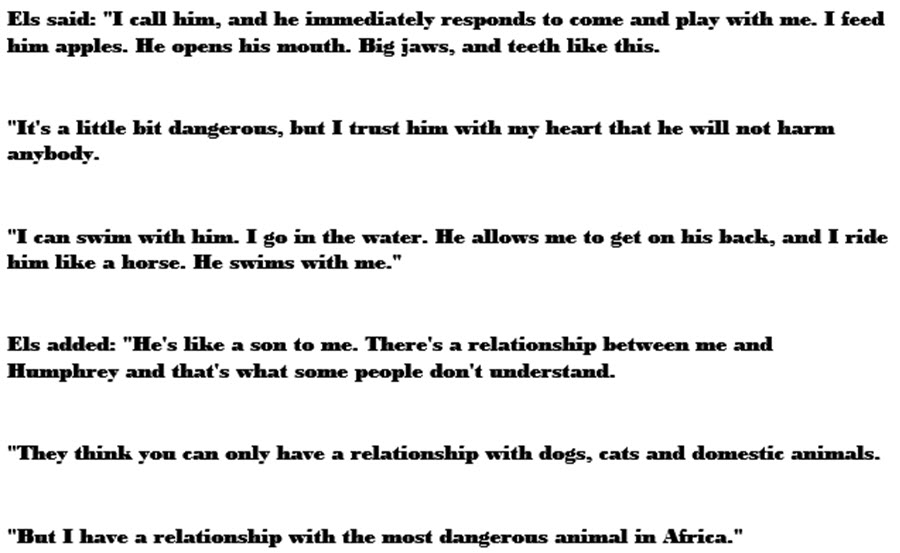 You can watch a video about this tragic story below.

And you can also watch a clip of Els playing with Humphrey below.