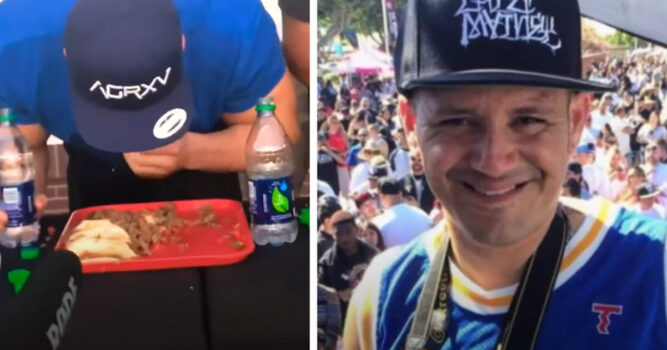 After a California man choked to death during a taco eating contest died, his 18-year-old son has filed a lawsuit. Marshall Hutchings alleges that his dad, Dana Hutchings, didn’t know the risks involved in a competitive eating competition. The incident took place at a minor league baseball game and the event’s organizers are being sued for negligence, according to a report by the Fresno Bee. Dana Hutchings choked to death on tacos when he was competing at the taco eating contest at a Fresno Grizzlies game in 2019. The participants at the contest were competing to eat as many tacos as possible during a period of time.

The owner of the Grizzlies is Fresno Sports and Events, and the team president Derek Frank said in an email that he won’t be making any comments at this time. The attorney for Dana Hutching’s son points out that professional competitive eaters train for these events and they know what precautions they have to take. Amateurs don’t have the same benefits of training and expertise. The attorney, Martin Taleisnik, said that the event conductors should have made the risks known to the people who were competing. A news report by the Independent at the time described the incident.

Taco Truck Throwdown 9 will move forward on Saturday, with over 30 taco trucks and the announced entertainment as scheduled.

However, there will be no competitive eating as a part of this year's event.

In their article, the Independent said that Hutchings fell “face down” on the table at the Fresno Grizzlies stadium. Hutchings was only 41 years old at the time of his death. Medical staff tried to clear his airway but were not successful. He was pronounced dead 30 minutes after arriving at the hospital that evening. People who were watching the event on the giant screens at Chukchanski Park said that Hutchings did appear to be eating much more quickly than other people in the contest.

Another Grizzlies fan named Eric Schmidt said that Hutchings told him that he hadn’t eaten all day so that he could prepare for the event. In Schmidt’s words, Hutchings was “winning.” Watch the news video about this story below.

Here is another video about this story.