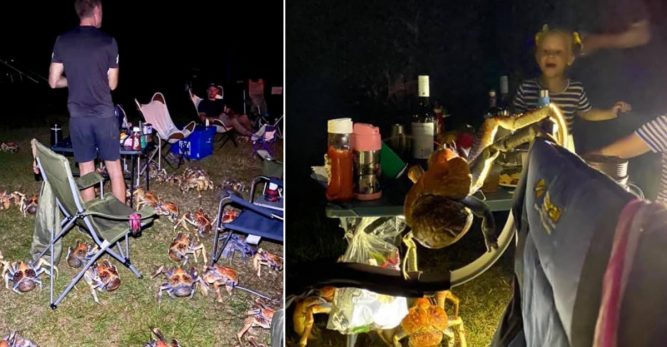 It sounds like a scene from a really bad horror movie. A family is out at a campsite enjoying a getaway. They start BBQ-ing when suddenly they’re ambushed by dozens of gigantic crabs who start crawling up the tables and chairs. But it really did happen. A family in Australia was enjoying a barbecue on Christmas Island when they were suddenly overrun by the giant crabs. Hilariously, Amy Luetich and her family barely batted an eye as these creatures just sort of took over the campsite. There were apparently dozens and dozens of the giant crustaceans. It’s likely that they smelled the food and thought they would drop by to say hello just at dinner time.

However, this is Australia, and while I’ve told my wife that we’re never visiting there because of the scores of huge and terrifying and dangerous animals they have, this Aussie family was unfazed. They just kept on minding their business and enjoying their night. The family just smiled for photos and let the crabs browse around the area. The crabs were robber crabs, also known as coconut crabs. According to Parks Australia, these crabs are the world’s biggest land crustacean. Yep, that’s right, in Australia, these huge crabs crawl around on the land. They can grow up to weigh 4 kilograms and measure as much as a meter wide.

These guys live a long time, too: up to 50 years. They’re known for walking away with people’s belongings, apparently. Luetich shared her photos with the Christmas Island Tourism Facebook page where they went viral. It’s absolutely fascinating to see so many of them crawling around. And also fascinating that the humans in the photos aren’t one bit nervous about it. The tourism board hilariously captioned the photos “Robber crabs behaving badly!” They noted that for slow-moving creatures, they “sure move fast when there’s food around.”

The organization noted that Robber Crabs are protected “and respected” on Christmas Island, so don’t anyone get any big ideas about a big gigantic Robber Crab sized pot of boiling water. How did it all end up? Luetich said this: “Then they started to climb up to the table, and another climbed onto the barbecue. We kept our tents away from where we had eaten, but one of the families said the whole night they could feel one tapping on the outside of their tent.” Here’s some video footage of them running around.