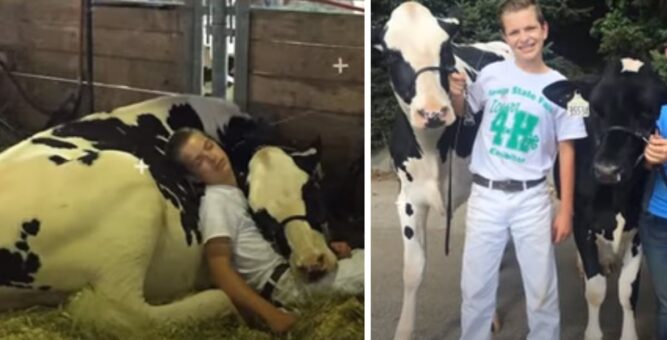 A 15-year-old young man named Mitchell Miner worked for a long time to show his dairy cow at the fair, and their hard work was evident when Mitchell’s dad snapped a photo of the two catching some shuteye together. We live on a farm and though I’m not personally a country guy by birth, we’ve heard a lot of stories and been witness to just how much work it is to get a cow ready for the show. Mitchell and his heifer, Audri, participated in the Iowa State Fair, in the dairy cattle division. They worked hard and put in a lot of effort, but all of the other young people did, too, and there was stiff competition.

Mitchell and Audri came in fifth out of seven at the fair and the exhausted pair just couldn’t keep going. Here’s the thing. These young people who are readying an animal for fair have to do all of the work themselves. They get up early to feed the animals, then put them down at night.  They have to brush them, groom them, and make sure they’re good enough to show. And on fair days, they have to get up even earlier and get to the fair, where they have an exhausting day of competition. So it’s no wonder they were so tired. When Jeremy Miner, Mitchell’s dad, came into the barn and saw his hard-working son asleep with Audri, he snapped a quick photo.

The two were snuggled up side by side. It’s very apparent that they’ve spent a lot of time together. The photo went viral on Facebook, amassing more than 15,000 likes just the day after Jeremy shared the photo on the social media platform. Mitchell’s mom, Laura, told the Des Moines Register that these kids spend a lot of time with their animals and become very comfortable with them. Jeremy and Laura both grew up on a farm, and they live in the city now, but they wanted their kids to experience things like they did as children, so they got them involved in 4-H. To do that, they borrow animals to have their kids work with and show.

4-H clubs are U.S. based youth organizations that teach children and teenagers to reach their “fullest potential” while advancing in agriculture and farming. In addition to farming and agriculture, they also emphasize healthy living, citizenship, science, technology programs, and engineering. Watch this video below about Mitchell and Audri.