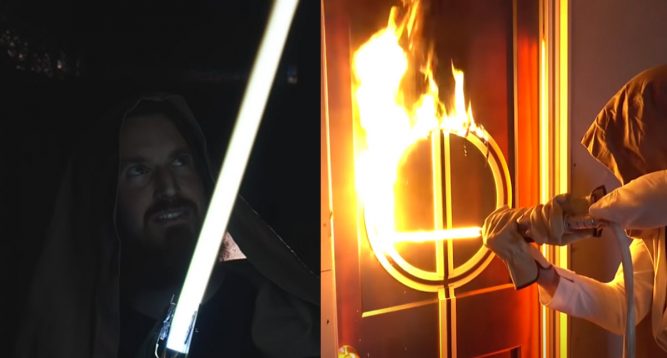 A YouTuber and engineer living in Canada recently created a real-life, fully-functional lightsaber, just like in the Star Wars films. While there has been no shortage of superfans attempting their hand at bringing the mythical high-tech sword to the real world, those “weapons” have mostly been things like non-retractable metal tubing that gives off light or just fancier looking toy light-sabers. But, for James Hobson, who’s well-known by his fans on YouTube as “The Hacksmith,” he’s decided to focus more on reproducing the lightsaber’s essential nature as a weapon capable of cutting throw metal using high temperatures.

And since Hobson knows a lot about laser engineering’s basic principles, we managed to create his very own plasma blade just like the ones wielded by Seth and Jedi in Star Wars! In his new video for his company Hacksmith Industries for a web series called “Make It Real,” Hobson shows how he could transform the concept previously only seen using Hollywood special effects into a real working device. The video, which was released earlier in October and has since garnered over 12 million views. Hobson’s replica lightsaber uses a portable backpack that connects to a hilt design to resemble those seen in the movies.

THEY MADE AN ACTUAL REAL LIGHTSABER OH MY GOD pic.twitter.com/bj61ZNctqd

The hilt supplies a constant stream of propane gas. When the gas is mixed with oxygen, it creates a beam-like blast of high-temperature plasma flame that resembles the light we see in lightsabers. However, this blad burns at over 4,000 degrees Fahrenheit which means it can pretty much cut right through most things in existence.

The engineer even showed how through using a range of different salts, he could alter the beam’s color. For instance, boric acid turns the beam green while using sodium chloride (also known as table salt) turns it yellow. You can attain an amber color by using Calcium chloride, and if you want a red beam, you’ll need some strontium chloride.

“Well, theories say that plasma is best held in a beam by a magnetic field, which, scientifically, checks out,” he continues. “The issue is producing a strong enough electromagnetic field to contain a blade, well the lightsaber would have to be quite literally built inside a box coated in electromagnets, which turns it into a kind of useless science project.”

The outcome of Hobson’s project is a retractable lightsaber replica that glows “so bright … this actually hurts to look at,” Hobson said.

— Things That Have Happened Before Yandere Simulator (@BeforeYandere) October 11, 2020

However, before you head to the garage to make your own, you should know that the price tag for creating this device is even higher than its heat output, with the laminar nozzle costing $4,000 just by itself.

“What we’ve made so far are some of the closest representations of lightsabers using real life technologies,” Hobson said.

Watch James Hobson’s amazing video below to see how he did it.