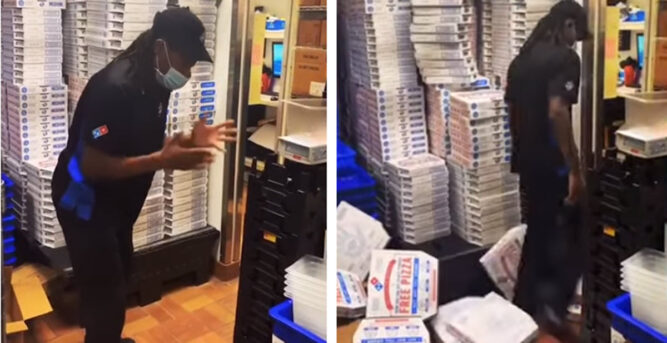 I’ve done delivery work, and it’s my opinion that people who don’t tip in the American tipping culture are shameful. Everyone who lives in the U.S. knows that restaurant servers and delivery drivers survive on tips because the companies pay so little, and for someone to neglect to leave a tip for these hardworking “essential workers” is beyond disgraceful. A heartbreaking video has surfaced of a young man named Malik who had a meltdown after he stood in the rain and then didn’t receive a tip. These young people work so hard, and sometimes it’s not even young people, but older adults as well.

Malik works for Domino’s and he had waited for five minutes in the rain for a customer, then he got nothing for his devotion and effort. In the video, you can hear him saying that he doesn’t want to work there anymore as he screamed in anger. The person who was recording the video was telling Malik to “calm down” as he laughed. However, Malik was rightfully inconsolable. In anger, he even punched a stack of empty pizza boxes, causing someone to say “Holy sh*t!” On social media, people were quick to defend Malik while explaining that tipping is important in the economy that we live in.

The problem isn’t the servers or even the customers. The problem is the cheap companies that put profit over paying their employees and contractors a livable wage. Even though most people defended servers and delivery drivers, some people said that they actually avoid places where tips are required. They feel that they’re already paying for a product or service. In the United States, this is flawed thinking. Unfortunately, the person who is going to be struggling is the person who is serving or delivering your products.

Something needs to be done about this. pic.twitter.com/PvxbgiQl2s

For Malik, it wasn’t just about the tip. It was also about the customer’s complete disregard for Malik’s extra effort and devotion to making sure his customer got a good product. Watch this heartbreaking video below.