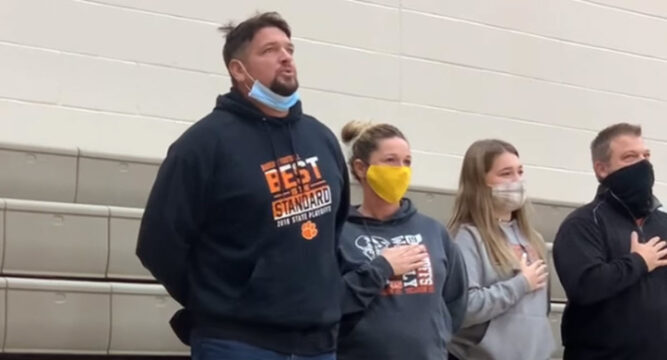 Our national anthem was derived from an 1814 poem by Francis Scott Key titled “The Defence of Fort M’Henry,” based on his eyewitness account of the Maryland fort’s bombardment by British ships in the War of 1812. The poem would later be set to music in 1931 and called the “Star-Spangled Banner,” becoming America’s National Anthem. As with our nation’s history, the poem did contain some darker parts, which are often sung in the modern version of the song, namely a verse endorsing killing runaway slaves. Nevertheless, the National Anthem has become a unifying message of hope, courage, and national pride, taking on a life of its own with ideals greater than its complicated origins.

And when folks attend all kinds of sporting events around the country, it’s customary that the national anthem’s sung before the start of the event. However, one dad’s recent bold and patriotic actions have swelled the hearts of millions of Americans after the school’s sound system failed just before the start of a local high school basketball game. Last Friday, the Portsmouth West High Senators and the Waverly High Tigers were preparing for a thrilling showdown on the court in Portsmouth, Ohio. But, when it came time to play the National Anthem, a problem arose.

@budsnanny
I just came across this news story.
I love this Dad – so endearing and warms my heart.
🇺🇲❤
He is just a regular guy , I like what he does at the end. 🙂

I hope you like the vid & the story! #PattyOnSitehttps://t.co/SGFDEzpGlC

The sound system wouldn’t work, which led to some awkward moments of silence and lots of “what now” looks from the school’s staff.

This guy just became one of my heros!! #proudtobeamerican https://t.co/G3cdkPuAp0

But then a dad named Trenton Brown decided to do something extraordinary that caught everyone off guard.

Brown has a background in music with experience performing and singing, but this was the very first time he’d ever tried singing the National Anthem solo.

When his performance was over, the dad humbly sat down as though he’d done nothing noteworthy at all.

Stepped up and RIPPED the anthem when the sound system failed

This moment might have been something only locals knew about had it not been for another dad named Johnny Futhey, who also had a son playing on the Waverly team.

This guy just became one of my heros!! #proudtobeamerican https://t.co/G3cdkPuAp0

Futhey would later upload the video to Facebook, and the reaction was incredible.

Futhey also noted that what the video did not capture was that as Brown was singing, other fans and players joined in, creating a moment of purely spontaneous and heartwarming patriotism.

You can watch Brown’s uplifting performance in the video below.