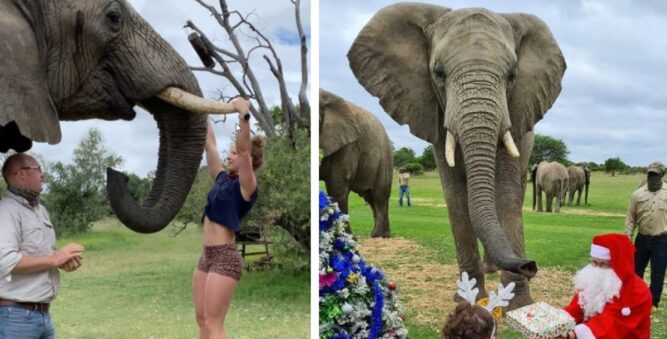 Sometimes in life, people (all of us) do things that, in retrospect, we shouldn’t have done. Everyone makes mistakes and there’s not one among us who hasn’t made a poor judgment call. It’s human nature to make mistakes. However, the most gracious and enlightened people can admit when they’ve done something wrong and in most cases, even learn something from it. Above all, it’s a small person who isn’t able to see that they were wrong and an even smaller person who refuses to apologize. That’s exactly what happened when a woman named Emma Rogers decided to do pull-ups on an elephant’s trunk.

Rogers is a gym owner from the United States and she recently visited an elephant sanctuary in South Africa. The park is Adventures with Elephants and it’s a common practice, according to photos on the sanctuary’s Instagram account, for people to go there to shoot their wedding photos and other things like that. While that may seem innocent, the fact is, these poor elephants are still having to basically perform. They’re not able to live a quiet and natural life as they were born to do. On the company’s Instagram account, you can see people playing with the elelphants, riding bikes up to them, and more.

A South African woman named Emma Rogers went to an abusive, exploitative elephant park in SA called "Adventures with Elephants" and was allowed to do pull-ups on an elephant's tusks

In fact, there’s one alarming photo that shows a Santa Claus at the park and he’s got children coming up and sitting on his lap. How can these giant and intelligent beasts really feel at peace with this going on all the time?

However, what Rogers did is even worse.  The woman had a photo taken in which she was doing pull-ups on an elephant’s magnificent trunk. Rogers looks like a small woman, but even if she only weighs 125 pounds, that can’t have been comfortable for the elephant and probably was actually quite painful.

Bullhooks are instruments of torture meant to scare elephants into doing what their human handlers want.

I was able to find multiple examples of their handlers carrying bullhooks.

The man on the right has a bullhook on his belt. pic.twitter.com/WDHpquwwyA

It’s also been noted that the organization uses bullhooks, which are instruments of torture that are specifically designed to scare these gentle giants into doing what their handlers want them to use. This park is a business disguised as a sanctuary and it’s just wrong.

3. Adventures with Elephants is one of those fake sanctuaries that pretends to care about the welfare of animals but actually exploits and abuses them for profit. There are many of them in South Africa and Southeast Asia.

When Rogers was confronted by angry people on social media, she didn’t back down or apologize. In fact, she doubled down on her abusive behavior and tried to shame anyone who was shaming her. She said she was having an “amazing experience” and that what she did was in no way cruel or unkind.

2. Then, when Emma Rogers was called out on this abusive and exploitative behavior towards this elephant, she didn't apologize or back down.

She doubled down saying that anyone shaming her is uneducated.

In the end, she ended up deleting her Instagram account, so perhaps people shamed her enough after all.