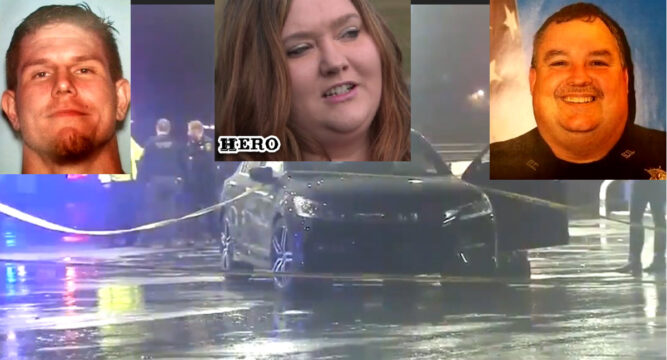 Most civilians can’t understand just how much pressure police officers face every day they wear the uniform. And while they protect the public from threats, these brave men and women are constantly under threat by those who would seek to end their lives. And oftentimes, these attacks come out of the blue with little to no warning, which can explain why so many officers always seem a bit on edge. Part of their training requires that they be alert and ready to react at all times. However, they are only human, and there are times when even the most vigilant officer can be caught off guard.

Recently, in Dawson County, Georgia, one officer suddenly found himself in a life or death situation after he was brutally attacked by a homeless man he’d given a courtesy ride to a local gas station. It’s said that the officer even gave the man some money to help him out before he was ambushed, and soon 52-year-old Sargent Randy Harkness found his life in grave danger. The officer was only trying to do the right thing and lookout for a person he thought needed his help, but instead of being grateful, the man tried to take his life.

Dawson County Sheriff says Sgt. Randy Harkness was trying to help a wanderer out when the man started beating up the deputy. A bystander shot the suspect. Story@5. @FOX5Atlanta pic.twitter.com/kfHVr7uL5H

The homeless man began striking the officer in the face. The attack was so unexpected the officer was quickly disabled, unable to defend himself from the barrage of blows raining down upon him.

Dawson Co. Sheriff’s Office: The deputy involved in this afternoon's assault is Sergeant Randy Harkness. Randy is 52 years old and is a 24 year veteran of the S.O. Randy has been treated and released from the hospital. pic.twitter.com/wCyHpAMHT7

However, a female bystander saw what was happening, and she knew that the officer would not live if the man continued his assault, or worse, grabbed his service weapon. Instead of running away, she rushed to the scene to help, drawing her legal concealed carry firearm. She then took aim and shot, alarming the attacker.

But, while the shot was enough to stop the homeless man’s assault, it didn’t hit him, and he started to take off. However, the woman wasn’t about to let him get away so easily, so she fired another round, which found its target this time. Other people heard the gunshots and got out of their vehicles. They applauded the brave woman’s courage for being the first person to come to the aid of the endangered officer. Eventually, both the officer and the suspect were transported to the hospital. However, only one of them was wearing handcuffs.

Because of her actions, Dawson County Sheriff declared the woman to be a real hero. And Sgt. Harkness was ever grateful that she was around to help him out during his hour of need. During an interview, the sheriff said: “I truly believe that she’s a hero.”

You can watch a news report on this remarkable story in the video below.