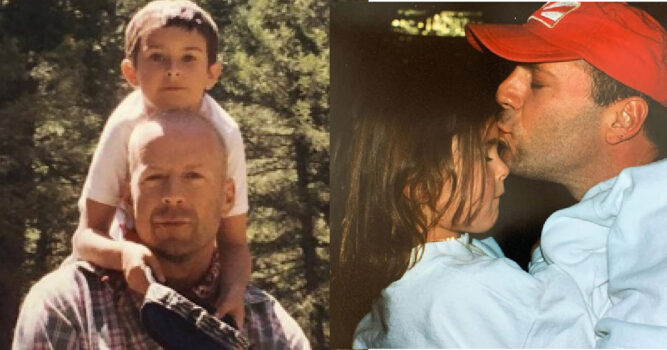 As you may know, the bond between a dad and his daughter is sacred. And if anyone knows that, it’s Rumer Willis and her dad, legendary actor Bruce Willis. Rumer recently shared a few pictures on her Instagram account reflecting on her childhood and her fantastic relationship with her dad.

She shares a picture taken in Hailey, Idaho, along with others she posted about her father in April. Recently, Remer and other family members have publicly shown their love for Bruce after announcing the news of his retirement due to his struggles with Aphasia. Fans were treated to heartwarming throwback photos of the actor and his family.

Earlier this year, Rumer announced her dad was retiring from acting.

In March, Rumer shared a photo on Instagram with a caption that thanked all of her dad’s supporters while explaining because of his health issues. Her dad was walking away from his acting career. She wrote of how his struggles with aphasia were “impacting his cognitive abilities” and that their family is coming together to support him as much as possible.

Rumor Celebrates her amazing childhood with her superstar dad on Instagram.

One of the ways Rumer decided to show her adoration for her father was by posting a childhood picture of her and Bruce. In this photo, featuring her dad with her sister Scout Willis, she wrote the caption: “I love you Daddio, to the [Moon] and Back. Thank you for teaching me to be so silly. I love laughing with you.” Each photo represents the light-hearted love and joy they shared.

She shines a light on their silly moments.

There are times when just one photo can say a million words, and then there are those in which it’s all about the attitude. We can see Bruce and Rumer showing the world their silly side in this one.

Rumer also pays tribute to her father for being a “girl dad.”

Bruce Willis and his ex-wife Demi Moore have three beautiful adult daughters, Scout, Rumer, and Tallulah. Bruce and his current wife, Emma Hemming Willis, both have two younger daughters, Evelyn and Mabel. So, yes, Bruce Willis is definitely a “girl dad,” and Rumer’s  little sister Emma commented, saying that he’s  “One of the best ones [girl dads] I know.”

This one just melts our hearts.

In a post that simply reads: “PAPA,” we see Bruce kissing Rumer on her forehead when she was a little kid. It’s basically one of the most loving and sweetest pictures you’ll ever see.

And her most recent post has folks reaching for the tissues!

Rumer and Bruce are making the same facial expression in a photo while enjoying a daddy-daughter adventure. Rumer is also rocking a short pixie cut with a white t-shirt while resting her chin on her dad’s shaved head.

It also looks like she’s holding his heat in her hands. This photo was taken in Haley, Idaho, and it’s a memory that Rumer, his oldest daughter, holds very near and dear to her heart. She captioned the picture with wooden log emojis representing the great outdoors.

Bruce Willis fans can’t stop raving over these photos as they praise Rumer and her dad for their “unbreakable bond.”

The Willis family plan to “Live it up.”

While one chapter of Bruce’s life comes to a close, as he says his farewells to Hollywood and acting, this family’s journey continues as Rumer says her family intends to “live it up.

And all of Bruce’s daughters absolutely adore their dad. In this photo, Rumer’s sister, Scout, thanked his fans for showing her father so much love after learning about his condition. In her caption, she wrote:

While fans may never fully understand the scope of Bruce Willis’ illness, it’s evident his daughters will be there for him every step of the way.

You can also watch a video about Bruce Willis’ retirement announcement and his family’s fantastic support below.