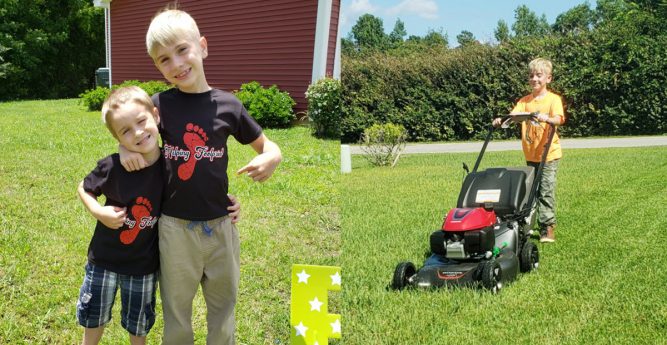 A pair of brothers from Conway, South Carolina saw some things that needed to be done and they took it upon themselves to step up and lead the way. The remarkable thing is that these brothers are Greyson and Garrett Winfield, and their respectively eight and six years old. Right now, there are people in our communities struggling more than usual and that’s the first responders who are on the front lines of the global coronavirus pandemic. Another group of people who always could use a helping hand is single mothers. To help in the best way possible, these young men are stepping up in a huge way.

The best way they could think of to help right now is by mowing lawns for first responders and single moms, but they also wanted to tackle the issue of feeding the hungry. These are just a few of the ways the brothers are making a difference. With the help of their parents, Greyson and Garrett started a nonprofit organization called Helping Footprint, which collects donations that they turn around and use to help pay bills for families in their area or buy gift cards for food. The boys have seen firsthand what a life of service looks like because they’re the sons of two former firefighters who are also in tune with the needs of their community.

Greyson’s hero is the late Pres. John F. Kennedy and would like to become a man as good as him someday. He’s also interested in being a Navy SEAL, noting that “helping others is the right thing to do. Also, JFK was in the Navy before becoming president and I want to follow his lead.” For now, he believes he’s making the world a better place with Helping Footprint, and we’re inclined to believe him. If someone can find a way to ease the suffering of one living being, they’re changing the world. He told CNN, “I want to help people,” he said. “There are other people who have nobody to help them and it’s the right thing to do.”

Garrett wants to be a chef, so he enjoys making snack bags and dumplings to help provide food to people in need.

The boys’ mother, Stevie, said that it was Greyson’s idea at first and his younger brother later joined him. In the beginning, she said he was “very emotional,” and asked how people will keep their homes and feed their kids if they’re not working. That was the beginning of Helping Footprint and that’s how it took off. So far, the boys have delivered gift cards for food to six families in their area and they’ve cut nine lawns. A Facebook update says that they have recently helped pay three months’ worth of electric bills for two families. They also gave a waitress a really nice tip.

Their goal is to mow five lawns per week. Through the organization, they have also donated Christmas gifts to children who are less fortunate than they are. With COVID-19 raging in our country, help is needed now more than ever and there are many things someone can do to help. Indeed, everyone can do something, and these boys have found a way to serve.