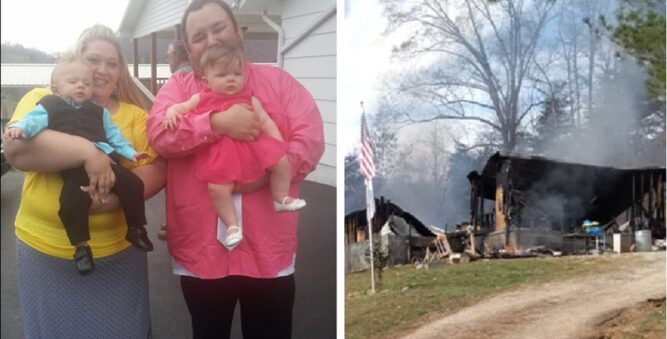 A little boy named Eli is being called a hero by people on social media and on the news because of his courage when his family home began to burn. A New Tazewell, Tennessee family, the Davidsons were having just a typical night on December 8. Nicole and Chris Davidson had fed dinner to their three young children and put them to bed. The kids were asleep by 8:30 p.m. and the parents weren’t far behind them. However, hours later, Nicole smelled smoke and it woke her up. Minutes later, the family’s home was aflame and the youngest, 22-month-old Erin, was trapped in her bedroom.

The couple was able to grab their two-year-old toddler, Elijah, along with Eli, who has been in foster care with the family for almost a year. However, Erin’s bedroom was unreachable and it was completely surrounded by flames. Chris Davidson told CNN that the fire and smoke were so thick that they couldn’t get to the bedroom. He explained that while the family went outside to her bedroom window to try to get in, there was nothing for him to stand on to reach up to the window. Because of that, he quickly picked up Eli, who was able to crawl through the window and grab the little girl from her crib.

The family is extremely proud of Eli, of course, but they’re not alone. As Chris said, Eli did something that even an adult man wouldn’t have done. And it was not a moment too soon because, by the time 20 firefighters arrived at the home, it was already completely engulfed by the ferocious flames of the fire. By the time the next day rolled around, nothing was remaining, reported Josh Miracle, the New Tazewell Fire Chief. Eli told CNN that he thought he couldn’t save Erin, but then he said that he had her. He said that he was very afraid but he didn’t want his baby sister to die.

Over the years, the Davidson family has fostered 34 children and adopted Elijah and Erin. As it turns out, both Chris and Nicole are former firefighters themselves. They’re starting over now, and a GoFundMe has raised more than $364,000 for them. Even being able to build back, the fact is, this family lost everything except the one thing that mattered most: each other.