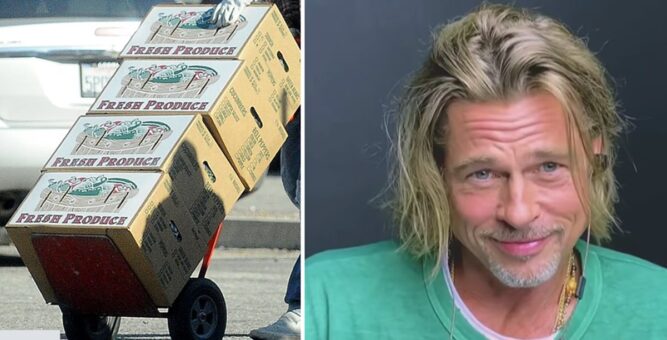 It’s difficult to do things invisibly when you’re a high profile celebrity. In fact, it’s nearly impossible, even if you’re just doing some low-key volunteering. Academy Award-winning actor Brad Pitt recently got busted doing something amazing in Los Angeles. The superstar spent several hours hand-delivering boxes full of groceries to families in need in South Central Los Angeles housing projects. The 56-year-old Pitt was spotted in L.A. in mid-November wearing a checkered flannel shirt that was red and black, along with a white t-shirt underneath and jeans. He was wearing a face mask also, of course.

Pitt is famously involved in charitable work and has made almost a second career of it. Back in July of last year, Pitt and Flea (from the Red Hot Chili Peppers) handed out food boxes to families who were struggling in Watts, which is another city in South Central L.A.. In the middle of the pandemic, this was much-needed relief to a lot of families. At the time, Pitt was driving the delivery truck and wouldn’t give an interview, but Flea told Fox 11 that since the community gives back to him, he enjoys being a part of it. The part he enjoys most is making new friends and “building bridges.”

Pitt and Flea are close friends and they were spotted unloaded a truck that was filled with food boxes. They were contributing to the Watts Community Core, which is a boxing program that provides opportunities to youth who are at-risk. Flea said that he loves being a part of all of it, and sees it more as he himself being given to than him giving. He feels welcomed there and says that they’re all working together to do beautiful things for others.

After Hurricane Katrina, Brad Pitt created the Make It Right Foundation, which builds homes for residents of New Orleans who lost their homes because of the hurricane, which happened in 2005. For the most recent volunteer efforts, bystanders made it clear that for Pitt, it wasn’t about getting recognized for volunteering. He was doing it for his own self-satisfaction out of a genuine desire to help. They said his heart was definitely in it. Watch the video below that shows Pitt hilariously reuniting with his ex-wife, Jennifer Aniston, with whom he remains friendly.