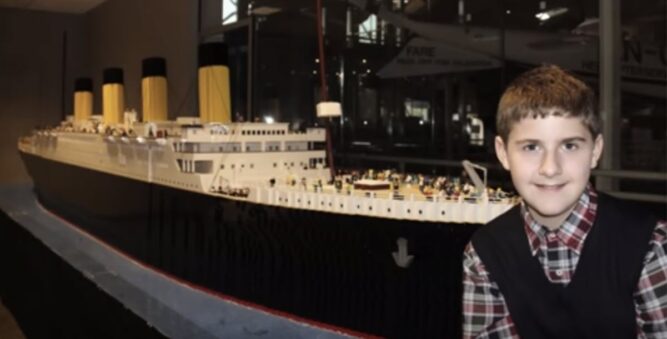 There are plenty of Titanic replicas in the world, but the world’s largest one that was made with Lego bricks was made by a 10-year-old boy who has autism. The replica ship is five feet tall and 24 feet long, and that’s pretty special in itself, but it’s the obstacles that Brynjar Karl Birgisson overcame to achieve his goal that makes this story so remarkable. We wrote about this before, but it seemed like a good time to revisit this remarkable story. Kids of all ages are spending more time at home right now and someone may be inspired to tackle a goal like this of their own.

Brynjar is from Iceland and when he was a little boy, he became fascinated with the Titanic, the famous ship that hit an iceberg and sank in the early part of the 1900s, killing hundreds of people. In fact, Brynjar became so passionate about the ship that he decided to tackle a project that only a very rare mind could tackle: building a replica of the ship out of Lego bricks. He was only 10 years old when he decided to do this project, and he used his superpower of autism to get it done, he says. The project took Brynjar 11 months to complete and he spent more than 700 total hours doing it.

What he ended up with was a masterpiece. The perfection in this replica is unbelievable. The replica model is so perfect that it has toured the world, starting in Norway and going from there to Germany, Sweden, and finally, in the United States. Until 2020, Brynjar’s replica was anchored at the Titanic Museum in Pigeon Forge, Tennessee.

With the completion of this complex project, Brynjar received attention and accolades from people all over the world. The young man has also hosted a TedTalk to explain how he used his autism to overcome the obstacles he had to fulfill a dream. In fact, he even wrote a book about it: My Autistic X Factor.

Brynjar says that everyone has a special talent, or what he calls his X Factor. The key is finding out what yours is by exploring the world and your surroundings, no matter how small your own world may be.

Below, you can watch the trailer to a documentary that was filmed about Brynjar’s project.

Here is his TedTalk.