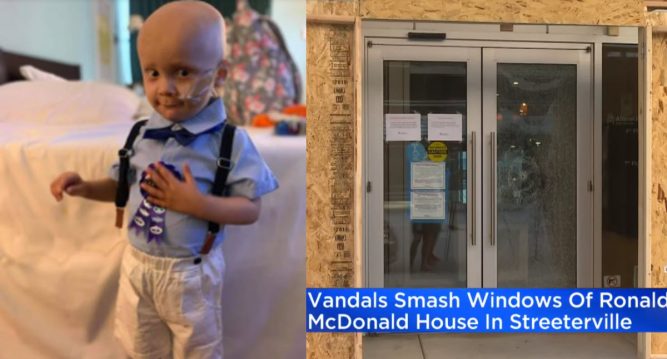 A toddler who had spent the majority of his short life fighting cancer was forced to miss out on his own birthday party after looters in Chicago made it far too dangerous for him and his family to return home. Owen Buell, along with his family, spent the previous month staying at his local Ronald McDonald House, an organization that offers support and provides a comforting environment for sick children and their families. Owen was scheduled to leave home, so he could go home to celebrate his second birthday, at his home in Joliet, a suburb 30 miles southwest of Chicago, Illinois. However, looters had made it too dangerous for the child and his family to return to the area; they even damaged the Ronald McDonald House.

Valerie Mitchell told CBSN Chicago that a nurse called her to deliver the bad news.

“Her exact words were, ‘I don’t know if you’ve seen the news yet, but they’re protesting or rioting outside Lurie Children’s, and we’re going to cancel all of the appointments today,’

“I was crying. I was mad, extremely mad.”

According to a Facebook page set up to support Owen and his family:

“One quarter of his life has been spent in surgery, treatment, in pain, so sick he could not keep his eyes open or hold his head up. His parents were not allowed to be by his side at the same time.”

Thankfully, the little boy was still able to return home the next day to enjoy a slice of his birthday cake and spend time with his loved ones. There is also a GoFundMe page set up to help Owen’s family financially, and it’s said that the Chicago Police Department had also reached out to Owen’s parents Brian and Valerie, offering them a police escort back to their home.

“Thank you everyone. We knew this journey would be long and difficult, we just didn’t know how difficult it could be when the world decides to throw in a few monkey wrenches,” as per the site.

It’s also being reported that over 30 families staying at the Ronald McDonald House were there when a mob of rioters and looters smashed windows and even fired gunshots while raiding nearby buildings.

“[They were] very concerned there was a lot of activity right in front of the house, people making choices that could put them at risk and put our families at risk, so the staff was frightened,” Ronald McDonald House Charities’ Lisa Mitchell told ABC7.

You can watch a full report on this story in the video below.