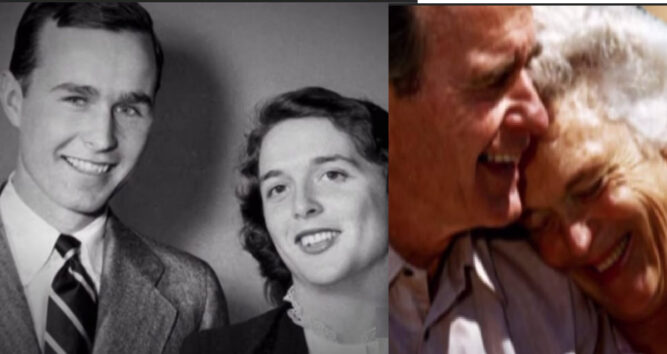 Barbara Bush is remembered for being a very loving and caring woman who’s blunt honesty and charm made her quite different from the First lady’s before her. And in April 2018, Americans said goodbye to the “First Lady of the Greatest Generation” when she tragically passed away. While Americans may disagree on politics, the universal love and admiration folks felt for the former first lady transcends politics. Many folks still remember one interaction in which Barbara was at an event talking about literacy. But once she reached the stage, the first lady realized that it would be more productive to ask the audience questions. She wished to know what issues she should use her position of power to focus on.

And it’s no surprise that Barbara’s final words would be powerful. In a new book called “Pearls of Wisdom: Little Pieces of Advice (That Go a Long Way), many of Barbara’s relatives share stories about the former first lady that even her biggest fans had never heard about. For instance, Jeb Bush recalls one of the very last exchanges between his mom and dad that brought the hospital staff to tears.

Jeb wrote that his mom took one look at her husband and exclaimed:

Her incredibly kind words were indicative of the kind of marriage anyone would count their blessings to have. These two soulmates had been together since they were teenagers.

USA Today reports, their whirlwind romance started back in 1941 at a Christmas dance. George, who was only 17 at the time, and Barbara Pierce (who was 16) caught each other’s eye. The two were eventually formally introduced by mutual friends. And when a waltz came on, the two opted to chat and get to know each other rather than dance.

Then in December 1944, George and Barbara were engaged. They would later get married in 1945. In 1989, while her husband was president, Barbara confessed that he was the first boy she’d ever kissed.

This lovely couple would go on to have a total of six children: Dorothy, Marvin, Neil, Robin, Jeb, and George W. Sadly, Robin passed away when she was only 3-years-old after being diagnosed with leukemia.

When her husband lost the 1992 election to Bill Clinton, he was respectful, polite, and helpful (the way you would expect a president to carry themselves).

Of course, Barbara would return to the Whitehouse in 2000 when her son George W. was elected president and served eight years.

In this 1964 photo, the former First Lady Barbara Bush is surrounded by her family. George H.W. Bush sits with Barbara. George W. Bush sits to right behind his mother. Behind the couch are Neil & Jeb Bush. Sitting with their parents are Dorothy & Marvin Bush.
Photo: AP pic.twitter.com/iFl92qfu8R

As for their legendary romance, the couple became the longest-married first couple in presidential history, a record that had since been surpassed by Jimmy and Rosalynn Carter.

After her death, George could not go on much longer and would pass away nearly eight months after she did.

After spending 73-years-with the love of his life, those eight months must have felt nearly unbearable. George H.W. Bush once said of Barbara:

During his father’s funeral, George W. Bush said that his father taught him everything he knew about being a good husband.

George and Barbara’s love story is one for the ages.

You can also watch a moving tribute to Barbara and George H.W. Bush in the video below.