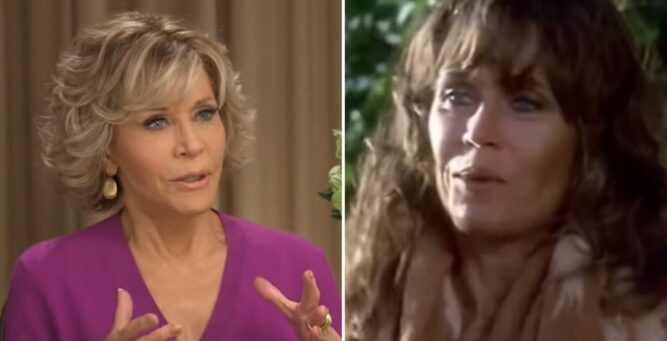 It’s hard to believe that the legendary actress Jane Fonda is 82 years old. The fact is, she still looks young and she says that she feels great as well. How does she do it? How does anyone at her age continue to thrive? Well, in a video, Jane joked that a lot of it has to do with “good genes and a lot of money,” but the fact remains that not everyone who has good genes and a lot of money still looks and feels as youthful as she does. So in all seriousness, there’s a bit more to it than just having good genes, and money can only buy so much.

Fonda offers up some tips for those of us who would like to look and feel as good as she does at age 82. She actually did a documentary some years ago where she discussed some of her own best practices. First of all, she says that she can’t do everything she used to be able to do but she believes that living a healthy lifestyle when she was young contributed to her good health and physique at her current age. As famous as she is for her acting career, she’s equally famous for her fitness career, and a lot of moms in the 1980s and 1990s swore by Jane Fonda’s exercise videos, my own mom included.

2. Remain as Active as Possible

Although Fonda has slowed down, she’s still as active as possible and still exercises. Although she doesn’t push herself too far, she does focus on low-impact exercises like cross-country skiing, long walks, resistance training, and yoga. Also, she wants to stay independent, so she knows keeping her movements up will help with that.

Jane Fonda says she doesn’t really believe in dieting. Overall, she just eats healthily and doesn’t eat after a certain hour at night. In the video below, she specifically mentions not eating after 6:00 p.m.

When she reminds people to stay busy, Jane isn’t just talking about exercise. She also means to continue doing whatever you’re passionate about, whether that’s work, volunteering, or hobbies. Whatever your thing is, stay busy.

When Jane Fonda is acting on the set of her hit Netflix show, Grace & Frankie, she doesn’t wear a ton of makeup. She prefers natural and lightweight foundation.

6. Get Help When Needed

Fonda encourages people to get therapy if they need it, admitting that she herself had a breakdown when she first started filming her Netflix show because she struggled with anxiety. The theme of the show reminded her of her own abandonment issues and it triggered her.

In an interview with Healthy Living, Fonda said that avoiding smoking is the primary key to aging as gracefully as possible.

@Janefonda thanks for grace 😭 pic.twitter.com/IlyAnSAmXg

Jane Fonda sleeps nine hours per night, she says. However much sleep you need, try to get that every day.

Watch the video below for more information.

Here’s a longer video with Fonda talking about how to be your best at any age.