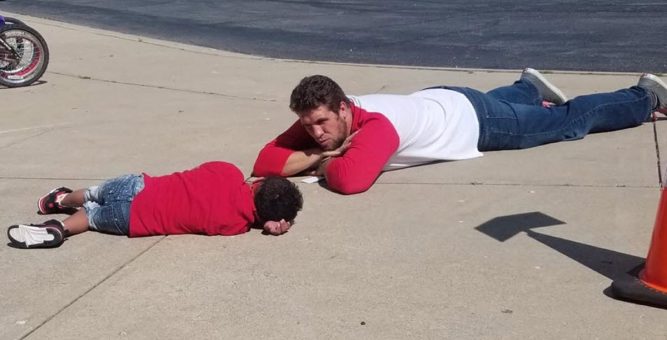 When a photo circulated on social media that showed a grown man lying on a sidewalk talking to a child who was lying down, a lot of people were surprised that a school official could care that much. However, the child’s mother wasn’t one bit surprised. Steph Compton’s little boy, LJ, goes to Garfield Elementary School in Marion, Ohio. Compton says that even though the school is across town from where the family lives, it’s for reasons like this that she is happy to make the drive. The mom said that her little boy was “having a moment” and the school’s assistant principal, Mr. Smith, got “down on his level to help him out.”

The eight-year-old boy was lying curled up on the ground, almost in the fetal position. Clearly, something was bothering him, but Mr. Smith was there to ride through it with him, whatever it was. LJ is in the third grade and he lives with autism and Down syndrome. The person who took the photo was Amber McKinniss, who said on Facebook that she took the photo because it melted her heart and LJ enjoyed it, adding, “It was the most amazing thing I’ve seen!” As soon as she snapped the photo, Amber sent it to LJ’s mom. When Compton posted the photo to her Facebook wall, it quickly went viral.

I absolutely LOVE this… LJ’s school has a new assistant principal this year… Mr. Smith… apparently LJ was having a…

Mr. Smith couldn’t be reached for comment, but a lot of Compton’s family, friends, and acquaintances had plenty to say, with many of them praising Smith from their time with him as a teacher to their own children. One woman said that “Mr. Smith was the best teacher,” and added that she was delighted to see that he took those values with him as a principal. She said, “Such a great guy!” Compton says that it’s amazing from the standpoint of a parent, to see someone care that much about your child. 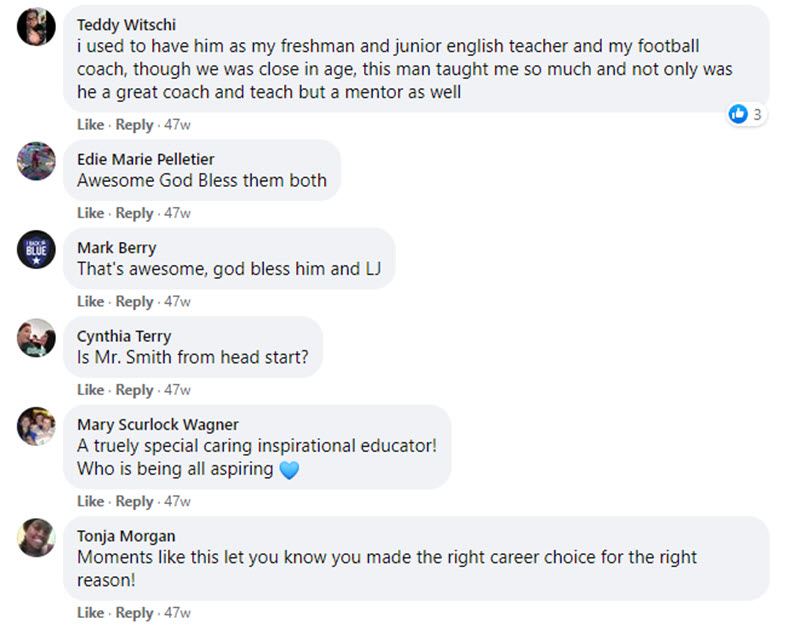 I know a lot of teachers and I can think of one man in particular who I could picture doing something just like this. He really feels called to teach and sees it as his life’s purpose. Kids who are blessed to experience these amazing educators are very fortunate.