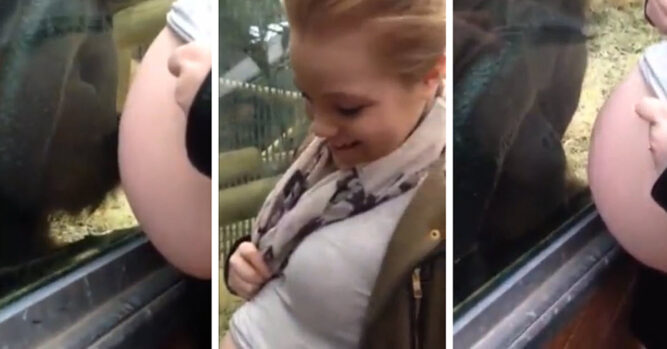 Although there are many animals to see at the zoo, one of the favorites for many people is the orangutans. It just seems as if we are able to see a little bit of ourselves when we look at them. They may not be saying anything but it seems as if they have emotion and they display it at the most unexpected times. Some people will say that the behavior displayed by orangutans is built into them and is nothing more than a reflex. Every once in a while, however, we see that there is something else going on behind the scenes.

A pregnant woman and her husband were visiting a local zoo and they managed to capture something on video that has captivated the minds and hearts of millions of people. The mother was quite pregnant, and she decided it would be a good idea to show the orangutan her pregnant belly. As it turns out, the orangutan was very interested and she even tried to caress it with her hand through the glass. It is almost as if you could see the fact that she knew exactly what was going on inside of that pregnant woman.

Not only did the orangutan try to caress her belly, she even gave her belly a kiss through the glass as well. It was a very tender moment and one that shows us animals have the ability to show emotion and sometimes, they do it in the most unexpected and beautiful way.