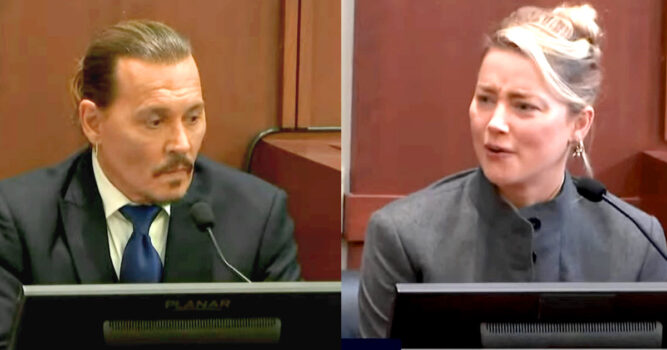 Amber Heard testified that she found it “hard to believe” her ex-husband Johnny Depp would ever claim he was a victim of domestic violence after the end of their toxic relationship.

The actress was under cross-examination by Depp’s legal team when she maintained that she was the victim of abuse at the hands of her ex-husband. However, he’s claiming it was quite the opposite.

Depp’s attorney Camille Vasquez asked Heard: “You didn’t think he would tell the world he was a victim of domestic violence, did you?”

“I found it hard to believe that he could or that he would do that, considering the relationship he and I had. I thought it would be crazy for him to do so.”

It’s actually scary how the Amber Heard cult are so supposedly pro #MeToo  but are ignoring the actual victims of sexual and domestic violence speaking up against her.

Why do you think we support Johnny Depp and not Amber? Because we know who the victim is.#AmberHeard pic.twitter.com/3QA1sdQgSE

The question directly responded to Depp’s evidentiary bombshell at the end of his testimony.

The jury heard an audio clip of an argument between the 56-year-old actor and his ex-wife, where Heard was heard suggesting that the world would never believe Johnny Depp was a victim of domestic abuse.

Vasquez then questioned Heard’s public appearances during the time she alleges she was being abused, including an appearance on The Late Late Show with James Corden.

Amber Heard is NOT a domestic violence victim… Amber Heard is an ABUSER and a LIAR
Justice for Johnny Depp 💜 pic.twitter.com/K2ZVjzS6gg

According to the alleged timeline of abuse, the taping of the show took place just a day after Heard claims Depp struck her, causing facial injuries such as a split lip.

Heard would tell the court that she did have a split lip during the show. However, photos of her appearance did not show signs of an injury. The actress claimed that heavy makeup and lipstick hid her injuries.

Vasquez also challenged her claims of sexual assault while the couple was in Australia.

“Tell the world Johnny, tell them I, Johnny Depp, a man, I'm a victim too of Domestic Violence and see how many people believe or side with you.” – #AmberHeard #JusticeForJohhnyDepp #AmberHeardIsALiar pic.twitter.com/uajwRJso2W

Heard previously alleged that Depp violated her using a liquor bottle and caused several other injuries while they were in the country filming Pirates of the Caribbean: Dead Men Tell No Tales.

When she was asked why there were no medical records of the alleged sexual assault with a wine bottle, Heard replied:

You can watch a video of the exchange below.