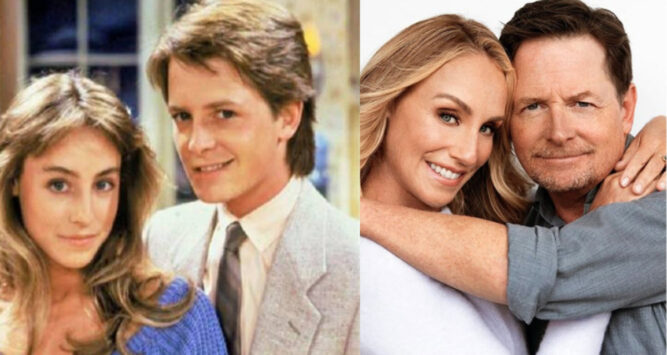 Keeping the spark alive in a marriage can be tough, especially after so many years have passed. During those years, couples have kids, experience fights, financial problems, health issues, the deaths of friends and family, and any number of life-altering events. Plus, when you’re with someone so long, you begin to grow more comfortable, which can also mean you’re not as eager to impress them the same way you were when you were dating. Soon, trendy or sexy clothes become old sweat pants and shirts with stains on them. For so many married couples, they experience life just going through the motions, but that’s not the case for Michael J. Fox and his wife, Tracy Pollan.

You see, Michael and Tracy have one of the most charming Hollywood love stories you’ll ever find outside of a script. The couple first met in 1988 when Tracy was cast to play his character’s love interest on Family Ties. Now, despite what many may think, it’s actually quite rare for actors to form romantic relationships after being cast in opposite romantic roles. However, three decades later, the two are still very much in love and very happily married. In Michael J. Fox’s new book titled “No Time Like the Future: An Optimist Considers Mortality,” the actor refers to Tracy as his “rock that keeps on rolling.”

Over the past year, like many of us, Michael and Tracy have spent a lot more time at home. And they’ve really enjoyed their quality time together at their gorgeous home in Long Island, New York.

Michael J. Fox Says He and His Wife of 32 Years Tracy Pollan Laugh Every Day ‘for a Good 2 Minutes’​ https://t.co/hMN3vE17wl

The extra time had given Michale many opportunities to finish writing a large chunk of his new book.

It’s also allowed him to catch up with their four children, Esmé, age 19, twins Schuyler and Aquinnah, age 25, and Sam, age 31.

Perhaps one day, Hollywood will write about their love story?

Tune in to @etnow tonight to hear @realmikefox and Tracy Pollan discuss their family in an exclusive interview. Be sure to look out for special footage from our annual #FoxGala, which raised nearly $4.6 million for #Parkinsons research! Learn more: https://t.co/sz127sKBbH

You can watch a video from 2018 featuring Michael and Tracy talking about their amazing marriage below.