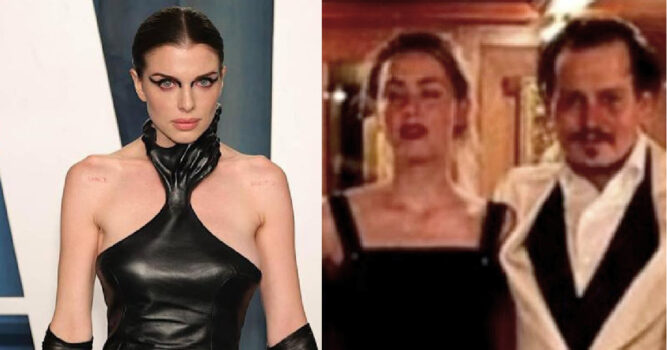 The Independent reports that in an Instagram post made on Fox’s account on May 14, the Uncut Gems star claimed that Heard could have never been an abuser in her relationship with Depp because she had neither the financial or physical power over the Pirates of the Caribbean star.

“Did she hit him Yes. Was it abuse? No,” Fox added in a since-deleted Instagram post which has been widely shared.

In what appears to be a reference to the ongoing legal battle between Heard and Depp, the 32-year-old model/actress wrote:

“[Heard] never had the power in the relationship to be abusive to [Depp]. Did she hit him? Yes. Was it abuse? No. You need to have power to be able to abuse it. She was 25. He clearly was always way more powerful including physically and financially.”

Needless to say, there’s been a heated debate over Fox’s comments, to say the least.

“It’s really sickening how people are still defending Amber… even after all of the evidence that was shown in court. there is literal proof that she abused Johnny & yet people still side with her…”

Another made the argument that Heard did indeed have the “power” in their relationship, saying:

“Power? You mean like the time when Amber told Johnny that no one will ever believe him, because he was a man…. Got it.”

However, others stood with Fox on the issue, including Washington Post Journalist Taylor Lorenz, who tweeted in addition to a screenshot of the comment:

“Abuse is about power and she didn’t have the power. I don’t think a lot of ppl don’t understand what abusive relationships actually look like. Julia Fox put it well [to be honest].”

There's definitely evidence that Heard was abusive, but there's (more and stronger) evidence that Depp was abusive. And yet the internet is in the middle of a month-long frenzy calling her a sociopath and him an innocent victim. https://t.co/pwKoFbnR7E

“No but the way julia fox has a better understanding of power dynamics than majority of troglodytes online….. and she’s one of the few people with a large following actually saying something…”

No but the way julia fox has a better understanding of power dynamics than majority of troglodytes online….. and she’s one of the few people with a large following actually saying something… https://t.co/SDq3fVAmm6

The 58-year-old Pirates of the Caribean actor is currently suing Heard for $50 million in damages as part of a defamation case taking place in Fairfax County, Virginia.

Depp is arguing that a 2018 op-ed authored by Heard and published in the Washington Post[2] defamed him by falsely implying he was physically abusive toward his ex-wife.

The actor further argues that he was the real victim of domestic violence in their relationship, which ended in 2016 after they had been married for only 15 months.