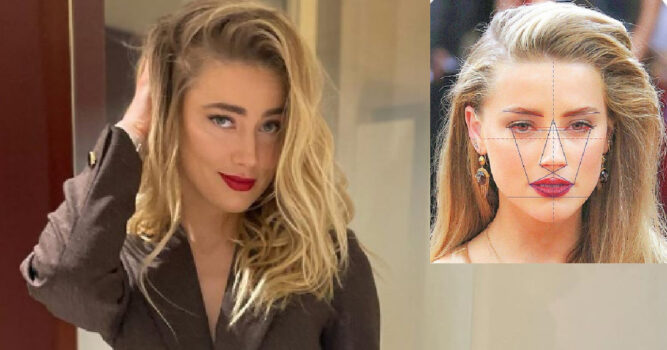 Beauty is said to be in the eye of the beholder. However, the Ancient Greeks hypothesized thousands of years ago that a specific ratio (Phi or 1.618) appears in many beautiful things throughout the natural world, and they believed it is the secret formula found in the most beautiful faces in the world.[1]

Dr. Julian De Silva has mapped many of the world’s most famous faces, and after a lot of calculations, Amber Heard’s face was declared the most beautiful of them all. According to Dr. De Silva, her “eyes, eyebrows, nose, lips, chin, jaw and facial shape were measured and 12 critical marker points were evaluated and determined to be 91.85 percent of the Greek ratio of Phi, which is 1.618,” the research adds.

Dr. De Silva, in charge of the Centre for Advanced Facial Cosmetic & Plastic Surgery in London, says the stats don’t lie. Coming in with 91.39 percent Kim Kardashian’s face was in second place, followed by Kate Moss, who had 91.06 percent. Emily Ratajkowski, a model for Blurred Lines, came in with 90.8 percent, while Kendall Jenner’s face came in fifth with a phi ratio of 90.18.[2]

“The Phi ratio of 1.618 has long been thought to hold the secret for beauty, but now with the computer mapping we can calculate how it applies to real women. After we had created the software and the algorithms for the key marker points on the face I thought it would be a good idea to test the system on some of the most beautiful women in the world and see if we could prove with geometry and science exactly what it is that makes a beautiful face. The results were startling and showed several famous actresses and models have facial features that come close to the ancient Greek principles for physical perfection.”