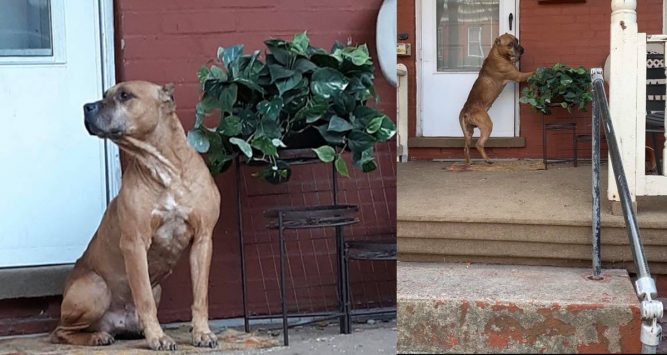 Most of us think of animal cruelty as physical abuse imposed on animals by humans. But, sometimes, the abuse can cut much deeper than physical wounds. Sometimes the abuse can be purely emotional. One of the worst types of emotional abuse owners could put their pets through is abandonment; this holds especially true for dogs, as they can become very attached to their families.  Cupid is a sweet dog who one day watched as his family was loading their belongings into their car. He was probably waiting anxiously on the porch for someone to call for him to join them. However, his family simply got into their car and drove away, never looking back at the pup they left behind at their former home in Harrisburg, Pennsylvania.

And for weeks after they left, the poor dog would sit on the front porch by the door, waiting for his family to return. For Cupid, this was the only home he’d ever known, the only place that was familiar. All of his family’s smells and memories were still there. But now, Cupid was all alone, watching day after day for any signs of his family. Concerned about the pup’s state, the neighbors contacted Janine Guido, the founder of Speranza Animal Rescue. She learned that the pup was sleeping on the porch of an abandoned house.

Once she found Cupid, Janine’s heart broke as she felt a surge of anger toward the heartless people who left the pup in such a poor state. She was so incensed that she wanted to call out the former owners on social media and show the world just what they had done. She would post:

“When I got there your dog was eating out of a dumpster. And when I tried to approach your dog he took off to his safe place. When I approached your doorstep, your dog frantically jumped up and scratched at the door – begging for you to let him in.” Since no one’s home, Cupid ran away. He was so confused about why his family won’t open up the door for him. “Your dog then bolted once again and ran down alleys. Away from me – the stranger trying to help him.”

Cupid would return, and Janine approached the pup gently. Once he calmed down, she told Cupid that she was there to bring him someplace safe and take him off of the cold streets. The pup seemed to understand and did not run. In fact, he waked up to Janine when she sat down and allowed her to put a leash on him. Janine recalled:

“I cried as I put your dog into my car. And even though I probably sounded crazy I explained to your dog what was going on the whole ride home.”

Despite his heartbreaking circumstances, Cupid is now happy and healthy at his new home at the Speranza Animal Rescue.

The pup is now surrounded by people who have nothing but love for him and swear to keep him safe and comfortable.

Janine shared that Cupid was just the sweetest gentleman pup ever since she first met him.

While he’s still a bit confused and probably misses his former family, Cupid is much happier.

The lovable dog would wag his tail for everyone he meets, and it seems that he’s now in good hands with folks who will never abandon him.