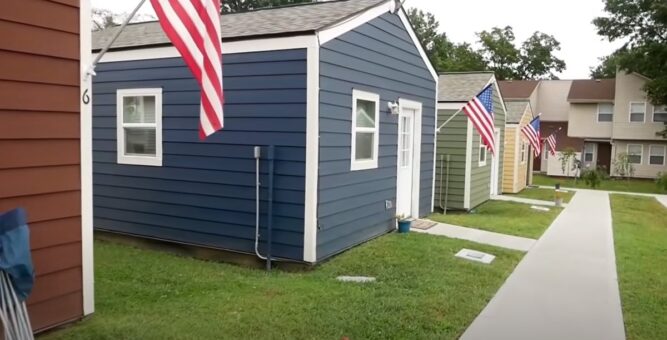 One of the biggest problems in the United States is that we have a lot of homeless people. I’ve spoken with people who visit the U.S. from other countries and they tell me that the most shocking thing about the United States to them is how many homeless people we have. For one of the richest countries in the world to have this problem is a national disgrace and it says a lot about how we value humanity (or don’t value humanity, as the case may be). Perhaps even more distressing is that a large portion of our homeless population are veterans.

Kansas City, Missouri is no stranger to homelessness. Like every other city in the U.S., they have homeless people, but they were determined to do something for their homeless veterans. The Veterans Community Project has a mission to provide temporary housing to veterans by housing them in their own tiny house village in the southern part of the city. Founded by a group consisting of combat veterans, the organization is making a difference. NowThis News reports that more than 500 American cities have expressed an interest in the project as well. The people who are involved in this excellent project volunteer their time.

But that’s not all. The volunteers also provide many of the materials used in building the tiny homes for the village. Their main concern is to put a roof over the heads of these brave former soldiers and to let them know that the community cares about them. With a roof over their heads, the veterans can recover not just from any physical injuries they may have, but also the mental issues that so many veterans struggle with. When soldiers leave the service, they often come away with PTSD and other challenges that make adjusting to life as a civilian very challenging.

Every tiny home in the village has the same basic structure, but they’re all different colors so that the veterans feel like they’re living in a unique community, not just a box. The homes include heat and air, and most of them have a living room, one bedroom, a bathroom, and a kitchen. Basically, they have everything they need, and best of all, they have a community of people to help them.

The tiny homes aren’t owned by the veterans who occupy them, but they can stay there as long as they need to. The city provides sewer and electricity. Watch the video below for more information on this wonderful project.