There are many days in our life that we will remember but our wedding day is one that will never leave our minds. It is the day we stand with our significant other and promise to be true to them for a lifetime.

Every once in a while, we hear about a wedding that is not only special for the bride and groom, it is special on a whole different level. We saw that in the case of Janna and Clifton, a couple that had an interesting story to tell.

You see, Clifton had pulled up alongside Janna when she was out shoveling snow from her driveway. He wanted to know if she needed some help.

It wasn’t long before love was blooming and they began dating. The story actually got its start a few years before they met.

It was in 2007 that Janna had a little daughter, Jayda. They were living their life together but soon, Clifton was a constant part of it.

By 2013, Jayda began to call Clifton ‘Daddy’ and a proposal for marriage was soon to follow. The story didn’t end and Jayda’s biological father died in 2016. Clifton took the family to Florida for a relaxing vacation so they could clear their minds.

While they were away, Clifton took Jayda on a shopping trip. They went to a jewelry store on their special outing and when they got back, the wedding plans went into full swing. 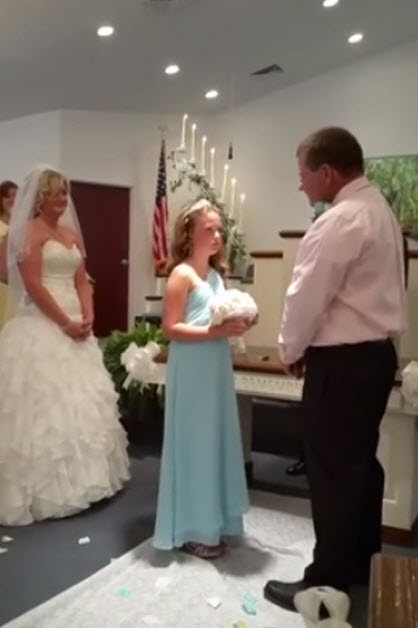 When the special day arrived, Clifton stood with Janna and prepared to say their vows. Before he did so, he asked his bride to step aside and allow her daughter to come forward.

This took Janna by surprise. Clifton had not told anyone what he planned to do except the pastor, photographer, and the DJ. Once Jayda got to the altar, he gave his vows to her.

This was a special moment but it wasn’t over. He then gave his little girl a ring of her own and suddenly, that special day of shopping came into focus.

Janna said: “He was more nervous over the vows to her than he was to me. He always knew that I was a package deal, and Jayda was always my number one. Now, she is both of our number ones, and I couldn’t be happier to say that.”