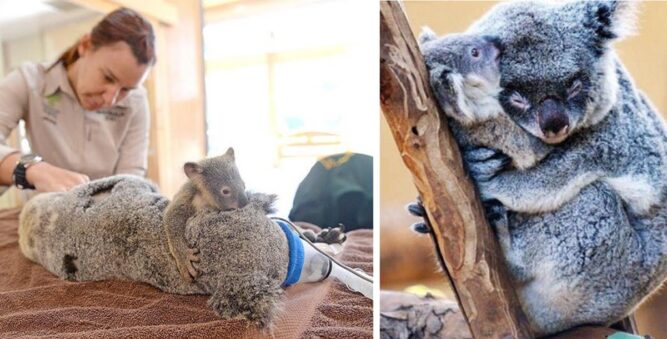 Human beings are unique in many ways, but we’re by no means the only species that knows how to show love and compassion. Time and again, we see examples of other animals that show that a bond between a mother and her offspring is real regardless of the species they’re from. For example, a few years ago, a series of heartwarming photos went viral after they were shared online by a celebrity. We wrote about this cute little koala last year, but we need some more cuteness in this new year we’re in, so we thought it would be a good time to share these photos again.

The celebrity who shared the photos on Facebook is comedian Masrty Fields, who is known to be an animal lover. The photos show a koala named Lizzy and her little one, who was adorably named Phantom. After Marty shared the photos, they were then shared by fans all over the internet. To date, they’ve been shared more than 297,000 times, have 32K comments, and more than 334,000 reactions (likes, hearts, etc…). The backstory is heartbreaking, but it does have a happy ending. The mother koala was taken to a wildlife hospital in Australia after being hit by a vehicle.

During the entire ordeals, Phantom never left his mother’s side. In fact, when the personnel at the facility tried to take him away so that they could perform surgery, he screamed in terror. Lizzy had a collapsed lung and facial damage, so she required emergency surgery. The staff decided to let Phantom just hold on tight to his mother. As long as he was near his mother, he was as calm as one could expect. All through the surgery, he clung tightly to mom, never letting her out of his sight for a minute. Lizzy survived the surgery and presumably made a full recovery.

In the comments to the original post, someone expressed frustration as to why Australians don’t stop and let these precious creatures cross the road safely since they do stop for snakes and kangaroos. the fact is, this was probably just a freak accident. Few people will deliberately run over an animal in the road.

Lizzy recovered, with Phantom right there by her side, at the animal hospital that was founded by “Crocodile Hunter” Steve Irwin and his wife, Terri. The Wildlife Warriors hospital and zoo was started in 2002.