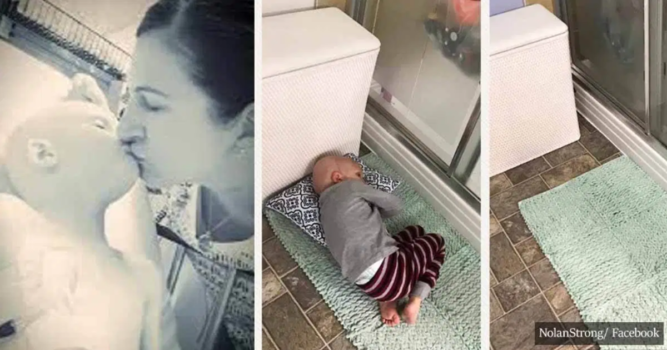 Most of us believe that our deaths will be sudden. Now by sudden, I don’t necessarily mean violent, but rather unexpected, like passing away in our sleep at a very old age. However, there are some folks, who have both the curse and privilege of seeing their imminent deaths more clearly than many of us ever will see ours. Some folks with this clear perspective react to this new reality with panic and overwhelming fear, while others find a kind of peace and acceptance of their fate. What’s unimaginable for most of us is a 4-year-old child finding the latter kind of brave perspective as he nears the end of a life that barely begun.

For young Nolan, he chose to focus on his faith and not the fact that he did not have much time left in this world. The little boy even made a special promise to his mother that he would see her again in heaven. Nolan Skully understood that he was losing the battle for his life, which was caused by a rare form of cancer that affects soft tissue called Rhabdomyosarcoma. The child was only 3-years-old when he received his tragic diagnosis, and from there, his journey through the merciless illness was chronicled in a Facebook page set up by his family.

Posted by NolanStrong on Friday, February 3, 2017

But to think that Nolan remained steadfast in the face of death because he was without hope would be a misconception. In fact, it was quite the contrary.  He still had dreams of becoming a police officer. Like his father, Jonathan, who is a firefighter, Nolan wanted to serve his community.

Posted by NolanStrong on Wednesday, October 19, 2016

Thankfully, young Nolan was able to fulfill his dream before he died, when the city’s Police Commissioner paid the young boy a visit in the hospital and swore him in as an honorary police officer.

He was given the nickname Sergeant Rollin’ Nolan.

Of course, his situation was still a nightmare for his family to deal with. His mother, Ruth, required every ounce of strength she could muster to keep herself together for Nolan’s sake. But throughout his ordeal, Nolan’s faith and courage served as a beacon of light. He was fearless even in the face of death, which is why he told his mom that they would see each other again in heaven.

Posted by NolanStrong on Thursday, October 27, 2016

His mom later shared this conversation she had with her son:

Mom: Poot, this Cancer stuff sucks. You don’t have to fight anymore.

Mom: No Poot!! Is that what you have been doing? Fighting for mommy?

Mom: Honey… I can’t do that anymore here. The only way I can keep you safe is in heaven.

Nolan: Sooooo I’ll just go to Heaven and play until you get there! You’ll come, right?

Mom: Absolutely!! You can’t get rid of Mommy that easy!!

Nolan: Thank you, Mommy!!! I’ll go play with Hunter and Brylee and Henry!!

Nolan absolutely loved having his mother close. That way, he could see and hold her. She was even granted permission to have a quick shower at the hospital, which was when Nolan closed his eyes and started to slip away.

When she came back, Nolan was surrounded by medical staff, her son was now in a coma, and his lungs had collapsed.

Overcome with emotion, she jumped on his bed and put her hand on the side of her child’s face. Nolan took a breath, opened his eyes before he smiled, and said, “I love you, mommy.”

The little boy passed away as his mother softly sang him “You Are My Sunshine” in his ear.

Later, she shared those precious final moments with him on the web and included a photo of Nolan lying on the bathroom mat outside the shower, something that gave him great comfort.

Two months. Two months since I've held you in my arms, heard how much you loved me, kissed those sweetie "pie" lips. Two…

Posted by NolanStrong on Tuesday, April 4, 2017

In a photo of Nolan in his police uniform, she captioned, “My beautiful little policeman!”

My beautiful little policeman! Please pray for our family as we begin tomorrow as the first day we will never be able to physically see that perfect face again. This pain is unbearable.

Posted by NolanStrong on Friday, February 10, 2017

Here’s a video about Nolan’s journey.

Please share Nolan’s story with your friends and family.