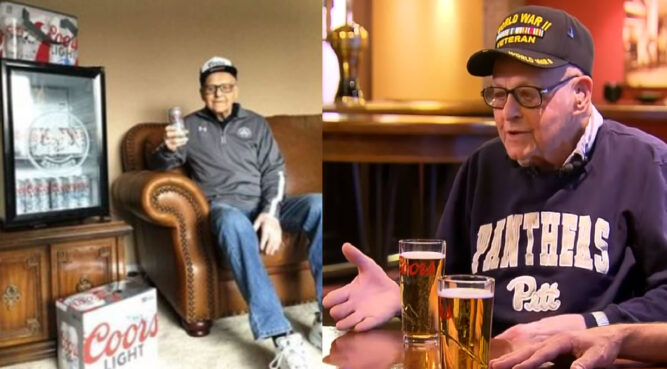 If you look around on the internet, there is no shortage of articles and videos telling you the “secret” to living a longer life. Many of them include tips like eating more veggies and drinking a lot of water. However, there’s one World War II veteran who just celebrated his 103rd birthday who offers a slightly different (and probably more popular) strategy: Drink a beer every single day.

Andrew Slavonic is a former WWII Air Force vet hailing from Pittsburg, who’s become quite the celebrity for beer lovers worldwide. You see, Andrew sticks to a strict schedule of enjoying a cold Coors Light every afternoon.

He explains how he first began drinking a cold Coors Light just after he finished mowing the lawn in the afternoon, a habit that the centenarian carried with him for many years.

His secret to a long life? Coors Light.

And after so many years, Andrew’s still going strong, and he strongly believes the beer plays a big role in his longevity.

But Andrew doesn’t drink alone. The Vet shares his daily beer ritual with Bob, his son, who says his father’s certainly found the secret to staying young.

Also, it turns out that Andrew is incredibly loyal to Coors Light, never once picking another brand.

Had the opportunity to toast with this man, Andrew Slavonic, today. Andrew is a 101-year old WWII veteran who says a #CoorsLight at 4p each day is the key to happiness & longevity. So cool and an honor that we got to host this man on our corporate campus today! #emp #GoldenYears pic.twitter.com/RGxI61Mic7

And when the company heard about their oldest and biggest fan, Coors gave the war vet a heartwarming surprise: a personal tour of their Golden, Colorado brewery where Andrew got to taste ice-cold beer straight from the source!

And now that another year’s coming to a close, on December 1, Andrew and his family celebrated the vet’s 103rd birthday.

While the world’s changed quite a bit just over the last couple of months, you can rest assured that Andrew’s not straying from enjoying his daily beer.

And while another brewery tour isn’t possible these days, Coors continued to thank their biggest fan with a lot of Coors merchandise including a fully-stocked Coors Light mini-fridge!

You can watch a news report about Andrew’s heartwarming story below.